Today started with a short visit to a nearby lagoon that was said to be worth while. Since many of the attractions were closed down for repair there was not as much to see as I hoped. We did however take a short boat tour which turned out to be very cool. Out in the middle of the lagoon was a small island, entirely made of oyster shells. Apparently fishermen have been dumping them there for thirty years which has formed a small island. It’s barely worth calling an island, it’s more like a sand bank I guess but amazingly a small mangrove tree has started growing there. Definitely a fun visit for anyone in the area.

Having seen most of what the lagoon had to offer, we headed south. About an hour or so later we came upon road number nine that cuts across the island through the mountains. It’s a nice drivers road that winds through the terrain without getting so twisted that you have to slow down much, in short a nice drive in a beautiful landscape with lush mountains all around and the occasional glimpse of the sea.

We excited the mountains and turned north for a blast along the beach, lush hills on one side and turquoise waters on the other.

During one of our small rest stops Yini suggested we make a small detour up into the mountains, it turned out to be a longer detour than I thought but the payoff was a fantastic view of the beach below. 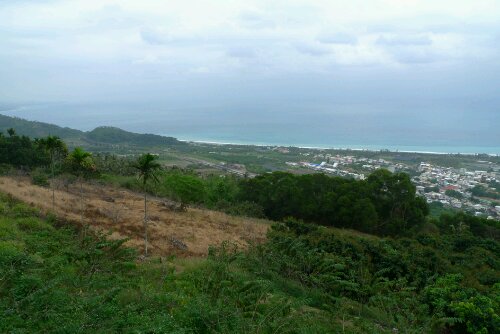 Coming back from our detour we had a quick dinner then kept going, as night fell we finally reached road 11, the coastal road that we had been aiming for. According to the brown road signs that point out tourist attractions (travelers in Taiwan will want to keep a lookout for these) the east coast is supposedly on big scenic area. This looks good for tomorrow.