Today has been yet another driving day, we left our little guest house quite early, and drove westward through gently rolling hills of green pastures. Since we had time we made a detour out to a sightseeing spot called Borgarvik, an old kind of fortification on a cliff top, and not far from there, a stranf cliff formation in the sea. 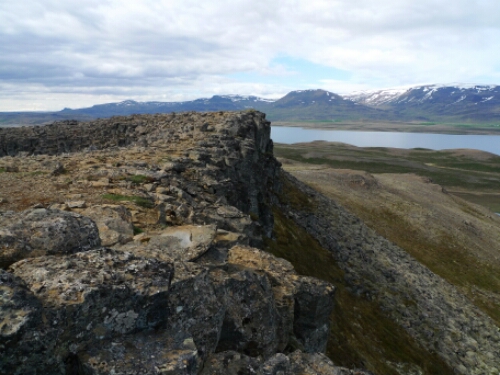 Cliff formation from above

I even clambered my way down to the beach.

We made a quick stop for lunch then drove on for most of the afternoon, the surrounding landscape becoming wilder all the while. We hit the coastal road as we entered Snaefellness peninsula came up a steep hill overlooking the archipelago below and just had to make a brief stop.

The archipelago is in the distance, admittedly not a brilliant photo.

As we came down from the hills and started following the meandering coastline the landscape became more rugged, with sheer rock walls rising right out of the green hillsides, cutting the sky in straight lines. A short while later we looped back inland and went through more civilized terrain on the way out to our stopping place for the night in Stykkisholmur.

Once we had checked in to the hotel and gotten some information from the most helpful tourist information I’ve ever been to, we headed out again. We started by checking out the towns volcano museum, which was small but nice, then the library of water, a place full of acrylic tubes filled with water which was less impressive than the tourist information lady made it sound.

View from the library of water

Finally we visited the small island down in the harbour and checked out the little orange lighthouse before heading out of the village despite the rain that had just started falling.

It was not long until we came to our destination, Berserkjahraun, a lava field where a path is said to have been cut by two Viking berserkers. The place is just like the outlandish landscapes we saw from the road the first day, a jumbled mass of bohlders of all shapes and sizes covered in a sickly yellow moss, here and there mounds of black and red lava rock. So far we’ve only seen these fields from a distance but here there is a small gravel road winding it’s way through it in a meandering fashion, which is great for seeing a bit more and with the scarce traffic, you can stop anywhere along the way. This was great, it’s just the kind of bizarre landscape I really enjoy just too bad it was raining. 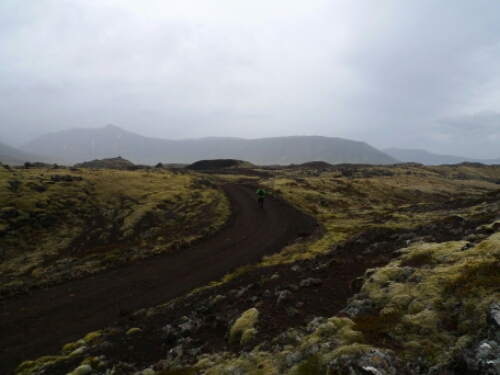 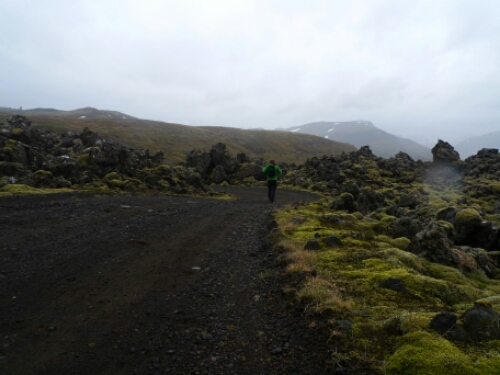 Playing the explorer walking ever deeper into the lava fields in all three photos.

When the raingot heavier, we hastens back to make sure the restaurants would still be open, had a feat meal at what I believe is the towns most popular restaurant then went back to the hotel to call it a day. Tomorrow we will explore more of the peninsula.