Some weeks ago me and Yini passed by an abandoned house at the outskirts of the city. We had no chance  to get in and explore then but today we drove up there, better prepared. I jumped the low wall and started looking around when all of a sudden some kind of alarm went off, I guess the place was less abandoned than I thought (despite being dark and empty inside) so I hightailed it out of there, grabbed the motorbke and rode off. After riding around at random for a while we figured out we could go to another abandoned place we saw a while back. We rode up into the mountains and after a half an hour or so we arrived at our destination, a kind of water park/campsite on the bank of a river. Sadly, Yini’s shoes were ill adapted to walking around in vegetation so she had to stay at the motorbike. Meanwhile, I climbed down to the river and walked over rocks and through the shallow water around to the side of the park facing the river. 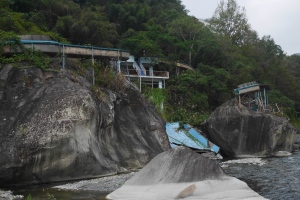 First view of the park 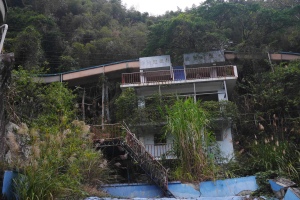 Building near the water slides 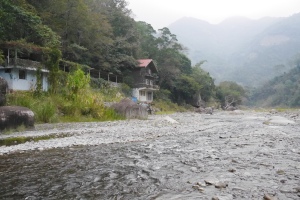 River view of the park

I walked along, looking up at the broken down water slides posed on some cliffs to the small house in the distance, which seemed to be the end of the park, no other structures around. 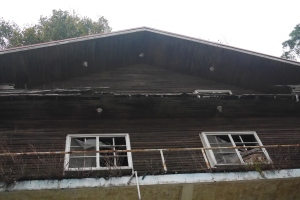 I started by exploring the two open rooms on the ground floor. One was a bathroom, the other had nothing of interest inside, both had a thick layer of silt and sand on the floor. What more, there were no stairs to the upper floors. So I cimbed up the to the staircase on the side of the house, and went to check the upper floors. 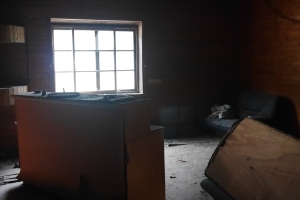 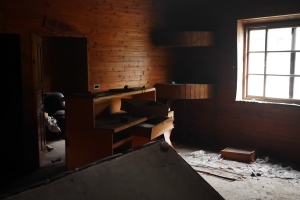 Main room of the house 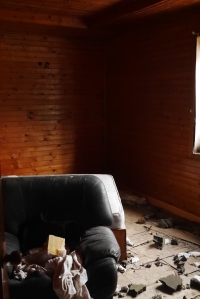 One of the bedrooms

View from the balcony

It was surprisingly clean inside for an abandoned house, you could almost live there. Finished with the house I moved on towards the water slides. 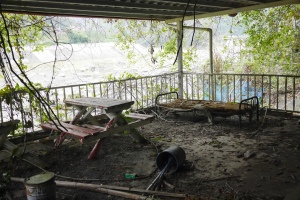 Terrace with a sitting area 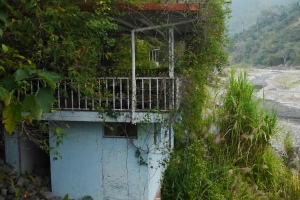 Bathroom under the terrace 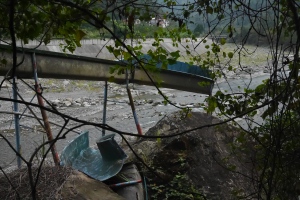 View of on of the slides through the jungle

It took a bit of climbing to get through the vegetation growing everywhere, over some fallen trees and so forth. Eventually I reached the starting tower for the slides and climbed to the top. 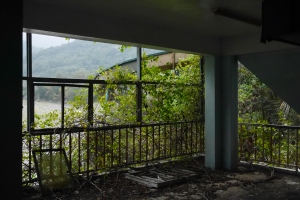 Bottom of the slide tower

One of the slides

…and ends with a nasty fall

It was pretty cool, there is a special, kind of eerie feeling connected with seeing amusement rides and such in this state. I did not venture further out on the slides however, seeing a plastic tends become brittle and crack easily when left out in the sun for too long. I simply didn’t trust them to be safe enough to walk on.

There was not a whole lot more to see, so I clambered my way back to Yini and the bike. Since we still had some time before nightfall, we rode back towards town slowly and explored the countryside some more.

Some kind of fluffy plant 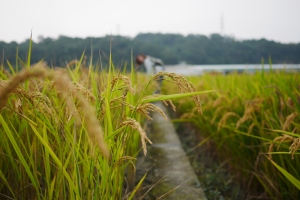 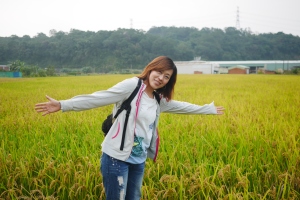 The colour of rice when it’s ripe is really beautiful

I also got to play around a bit

We didn’t stop for any more sightseeing, but the road back was a really good ride. Generally country road 3 in the west and road 11 on the east coast seem to be the best for motorbikes. Anyway, it was a good day, i haven’t been to such a good abandoned place in a while.

Just to en with an artsy shot