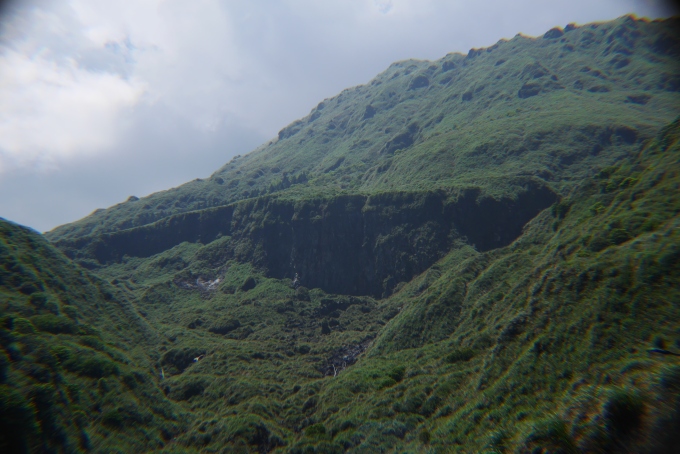 This morning we started by going to the seashore park around the corner from our hotel, took a walk out towards the tip of the small headland, and looked at a cliff formaion in the sea called the twin candlesticks.

View of the harbor and our hotel on the left side 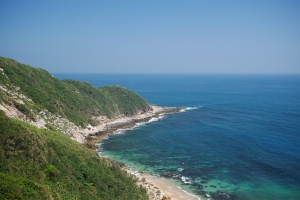 The view from the top

Tip of the headland.

We then got on the motorbike and headed inland toward Yangmingshan national park. On the way we came across the gigantic rusting skeleton of an abandoned factory so we just had to make a quick stop. 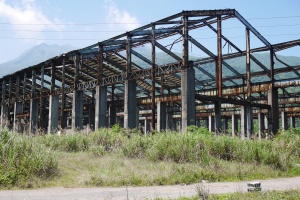 It’s hard to get a photo showing the true size of this thing. 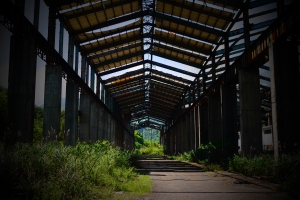 See how long that hallway is 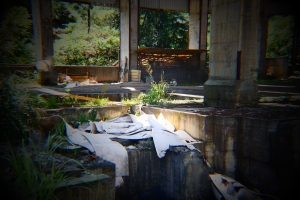 Random shots from among the ruins

A short while later we got up to the national park and  stopped by at one of many visitors centers where we had a make-do lunch in the small gift shop. We then went down to look a the attraction that was the reason for having the visitors center in the first place. It turned out to be a big, sulfur smelling crater, with plenty of volcanic steam coming out of it. Except for the heat and surrounding lush vegetation, it sort of reminded me of Iceland and the area around lake Myvatn.

View from a random stop along the way

The path to the visitors center

Yini by the crater

From there we headed to the next big attraction, a large, relatively flat plateau covered in green grass that used to be a pasture for grazing cattle. They do still have some cattle up there now, but I think it is more for how than anything else.

Right around the time that I took the last photo, I realized the keys to the bike weren’t in my pocket, I must have left them in the ignition. I rushed the few hundred meters back to parking lot to make sure the bike was still there. Since this is Taiwan and things rarely get stolen, everything was alright, the keys were just where I left them. After this little episode, we didn’t really feel like  go back onto the grasslands, and knowing that we had some way to go to get home, we decided not to go to any more tourist attractions.

We rode down the winding mountain roads to the northern edge of the city, battled our way through Taipei traffic all the while sweating like pigs from the heat trapped between tall buildings. When we finally made it out on the other side of the jumbled city streets, we settled down for the long slog homewards, only stopping briefly here and there to rest our sore backsides. We arrived home around 6:30, feeling absolutely knackered.

In hindsight, having the last hotel closer to home might have been a wise choice but on the other hand we wouldn’t have been able to see so much of the coast and Yangmingshan in that case. Despite the tiring ride home, I really enjoyed my weekend and I think Yini did too. The best part, in my opinion, was the wild hot spring in Wulai, I’m willing to go back just for that.

Just one final picture of the candlestick rocks