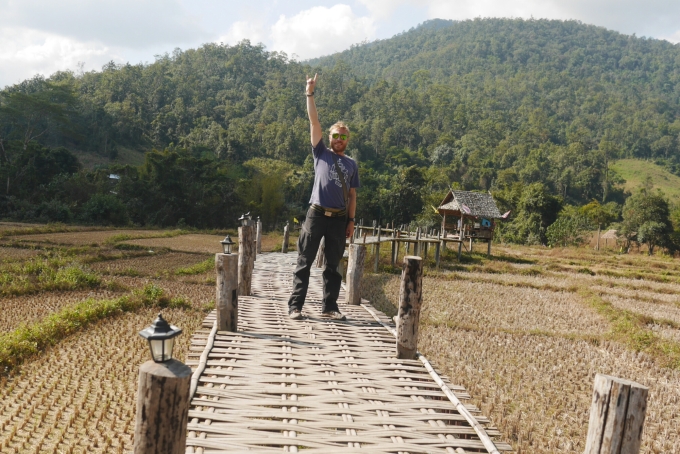 When I woke up this morning the bike wouldn’t start. Though it seemed fine last night the battery had died during the night. I tried to push start it a couple of times but eventuallyI had to go to a repair shop to get a new battery.

While walking around in the town last night, I took note of a few of the places Near Pain that tour companies bring their clients to. My next goal was only about 100 kilometers away so despite wasting an hour on the broken bike, I figured I still had time.

My first stop was Pam Bok waterfall which, after seeing many spectacular waterfalls in a short while, was not very impressive. One phenomenon that I see here and there is how people build little piles of rock to mark their visit. To me it’s a rather strange thing to do but each to his own I guess.

Stone piles left by other tourists

The second stop is was a place simply called Bamboo Bridge. It’s a small village where they have built a series of walkways and platforms out of interwoven slats of bamboo, a couple of feet above the rice paddies. I have never seen this kind  of thing anywhere else bit I think it’s really cool. Of course, now that it’s winter, the rice has already been harvested and the brown stalks stand out of the mud like stubble. I believe it must be very beautiful when the rice stands tall and green, waving in the breeze. 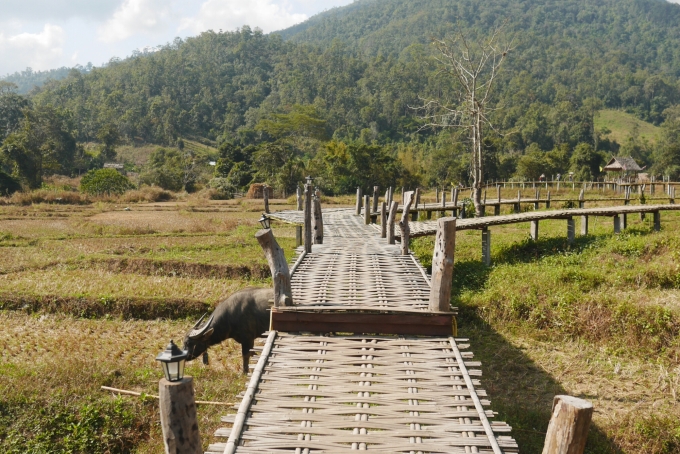 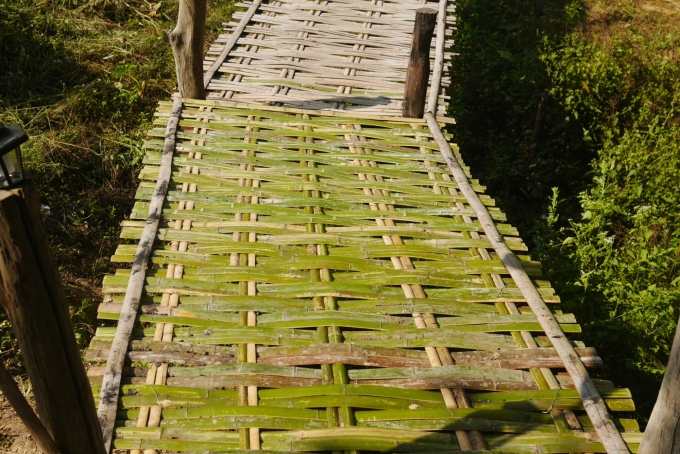 A closer look at the platform. There is a wooden frame underneath but most of the  time you are just walking on thin strips of bamboo.

Entrance to the bamboo bridge temple. Unfortunately it’s only open on religious holidays so I had to turn back.

Me on the bamboo bridge

The last stop before leaving Pai was something called The Landsplit. As the name implies, it is a place where the land had split due to an earthquake, a wide fissure runnibg through the landscape. As if that wasn’t special enough, the people there are extremely hospitable. They are all smiles and genuine warmth and offer you fruit and juice for free and you can make whatever size of donation you think is appropriate. 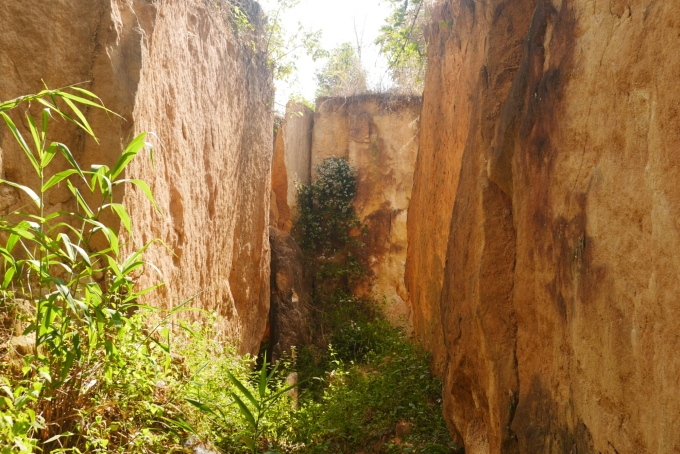 After lunch I headed off towards Mae Hong Son. I just have to reiterate how good it is to be on a proper bike, the way the suspension just eats up the bumps, and that secure feeling of knowing there’s always a bit of extra power on hand. The road to Mae Hong Son is extremely curvy but pretty smooth and great views all along the way.

The bike and the landscape

The road, just before sunset

I heard from someone that there’s a Chinese village, just next to the border, some 30 or 40 kilometers north of Mae Hong Son. It didn’t actually sound super interesting but I had some time left so I went to check it out. The place is pretty commercialised, with a whole slew of shops selling dried fruits and Chinese tea.

The town is just by the lake 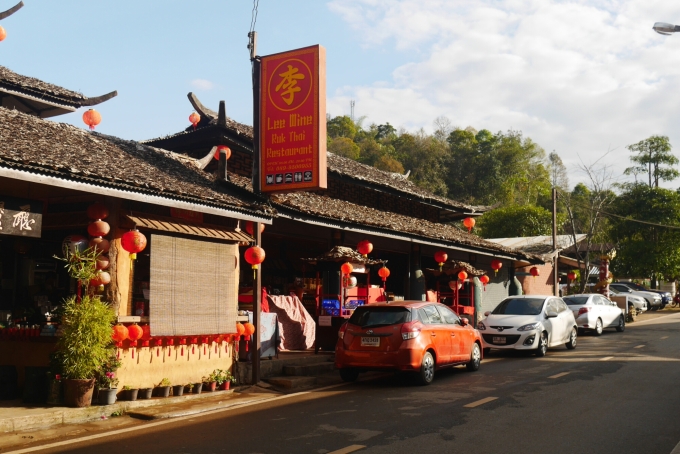 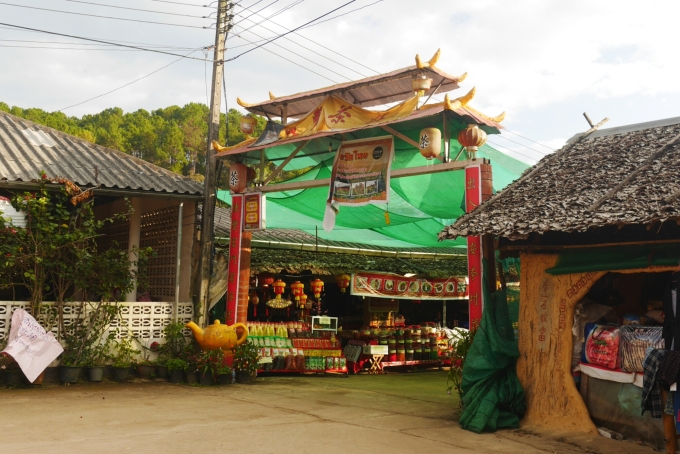 Looks very Chinese to me

The home stay I’m at, Uncle Aods Home, is really good. Just as I was about to head out for dinnet, my host and hostess invited me in to eat with them. We had some kind of Thai barbeque called mugata. While we ate, they kept talking, mentioning sights worth visiting in the nearby area. It seems I have my work cut out for me if I want to see them all. 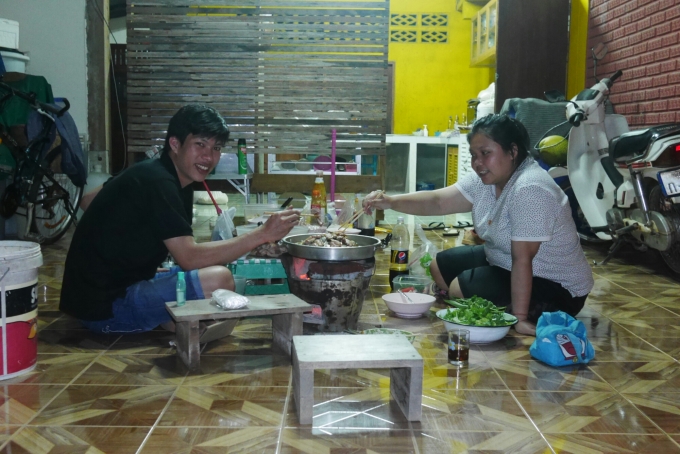 Host, hostess and me sharing some mugata 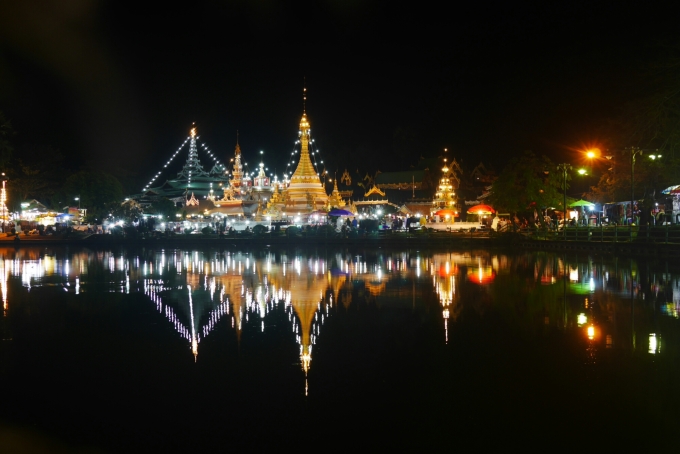 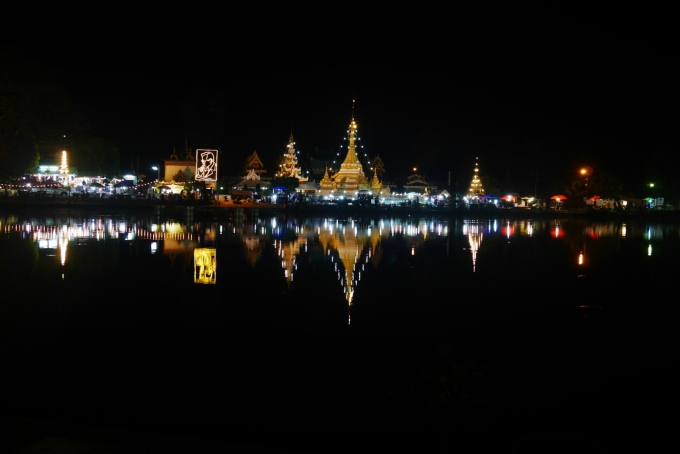