A couple of Taiwan’s major country roads (road number marked by a blue shield) go through the mountains. Last year, Renegade Wife and I rode across the island on one of them, number 14 – often referred to as the Central Cross-Island Highway – and despite some rather miserable weather, it was a fun little adventure. There are a few more that look very tempting to a motorcyclist studying a map of the country and as it happens, they are connected in a big loop. With Tomb Sweeping day extending the weekend to four days, and the weather finally becoming a bit more pleasant after the winter, this seemed like the perfect opportunity.

We set off on Saturday morning, going north-east through Hsinchu county into Taoyuan on the so-called Roma Road (country road 118) until we joined road number 7, the northern Cross-Island road. The road is pretty narrow at places and kind of bumpy but a good ride none the less. The weather wasn’t perfect, a few degrees warmer would have been nice but considering that it had been raining cats and dogs the night before we really couldn’t complain. Of course, riding a motorbike is tiring no matter how fun the road might be, so we stopped at a couple of places to rest and take in the view. 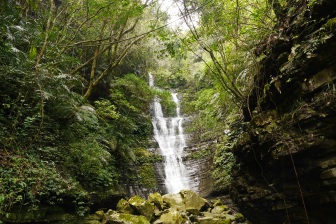 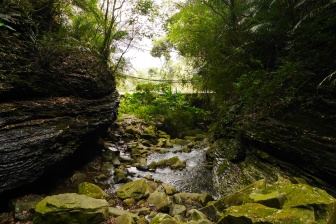 Secrete little waterfall by the road side 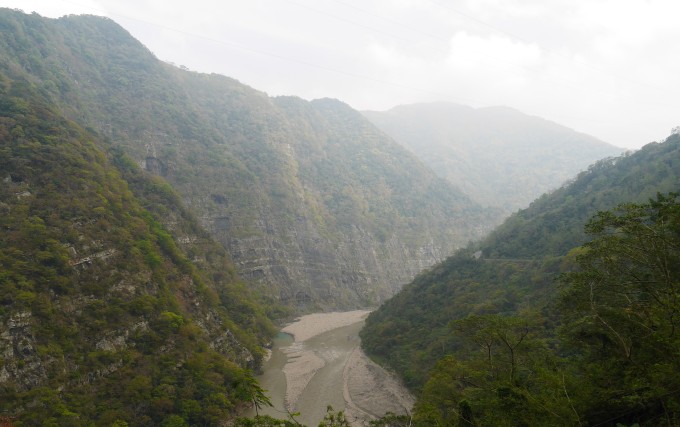 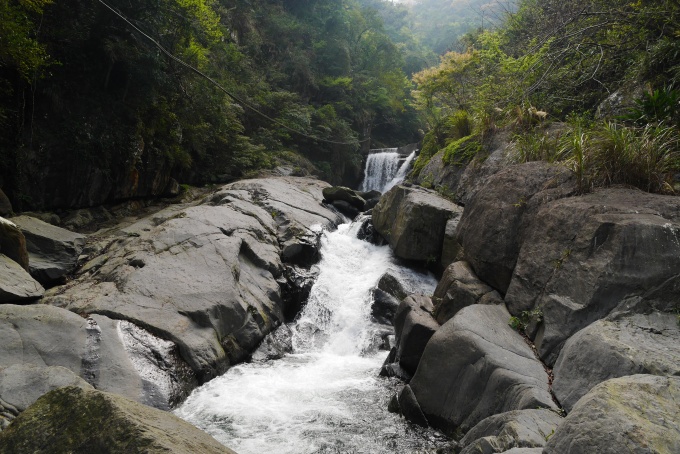 Old bridge across the river

We reached our hotel, a large complex some distance from most other civilization, in the late afternoon. We dumped bags then headed out to a wild hot spring to relax a bit after the long day. The hotspring was perhaps a bit less wild than I had expected, with a decent car you can actually drive down to the dry river bed and several families were camping in the area but it’s still wild enough to feel genuine. Switching from the hot water to the cold of the river is really refreshing.

The next day we embarked on the road going diagonally southwest from Yilan towards the central mountains (number 7甲). It is both wider and smoother than the cross-island highway and it’s really a fantastic ride. If you’re a motorcyclist, I highly recommend this road…Actually I take that back, don’t go there, I want it for myself. Around lunch we stopped at Wuling Farm, a giant government owned farm with plenty of trails to walk and things to see. We only had time to do a fraction of the things you can do there but we did see some beautiful landscapes with cherry blossoms and tea gardens. 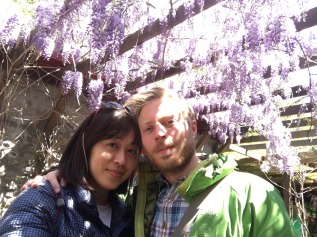 A different kind of flowers, don’t ask me what they are.

Are we in Canada?

In the afternoon we started climbing higher and the mountains got steeper. What really surprised me was the amount of farms at this altitude, the fields climbing the steep slopes. It’s also interesting to see how individual farmers have built their own, rather precarious looking cable cars to haul stuff up and down the slopes. 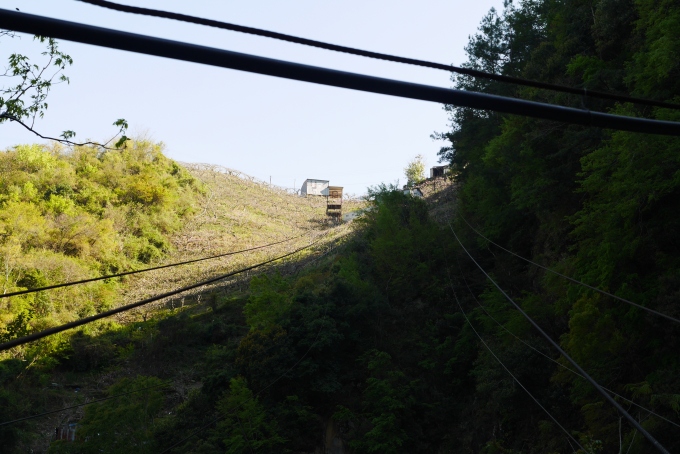 We also stopped at a bridge that is no longer in use for traffic that has an interesting story behind it. The steel beams were produced in Germany to be used for a railway bridge by the french in Vietnam. When the french lost the battle of Dien Bien Phu in 1954, the steel was stuck in transit in Thailand. Through various negotiations, the beams ended up in Taiwan as part of the Cross-Island Highway. What’s fun is you can still see the French information plaque.

We slept that night in Lishan village, a popular stopover on the cross island trail, even president Chiang Kai Shek had a villa there. The village itself doesn’t offer much to see or do (other than the spectacular view of course) but definitely get some dried apples if you go there.

The plan from the beginning was to take the original Central Cross-Island Highway i.e. road number 8, but when we were in Lishan we found out that it is closed somewhere along the way due damages from typhoons and earthquakes; the only people who can go through are the one’s who are registered as residents in the area. We knew about this from before but I remember seeing somewhere that it had been reopened so I was a bit disappointed at this news. I understand that it is both difficult and costly to repair such a road but I feel it it’s a bit deceptive of the Taiwanese government to keep it as a major country road when it’s actually only open to a few thousand people.

With no other choice to get back to the west side, we had to take road number 14 again. Since it was foggy and raining the last time we did it, it really wasn’t such a bad thing to be forced to ride up to Hehuanshan with nice weather. The views along the road are, if possible, even more spectacular than the ones we saw the previous days, at times it felt like we were riding through a Bob Ross painting. 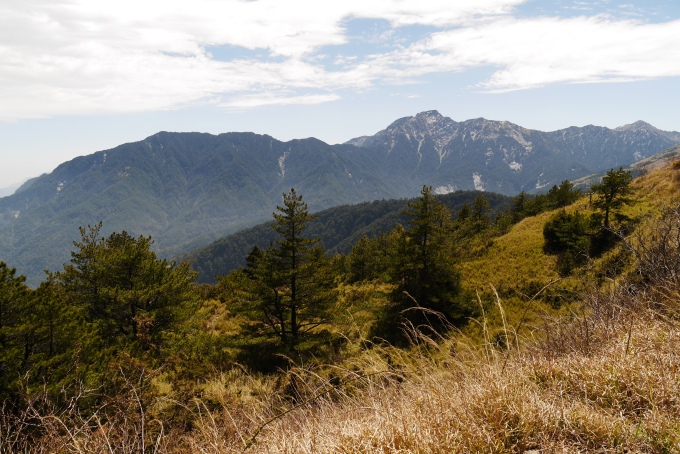 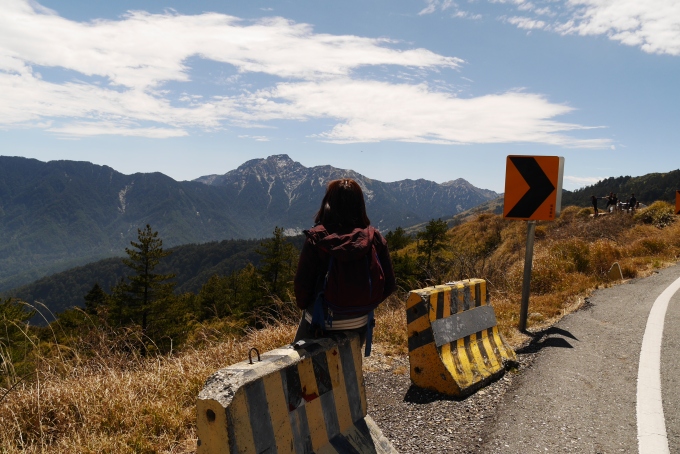 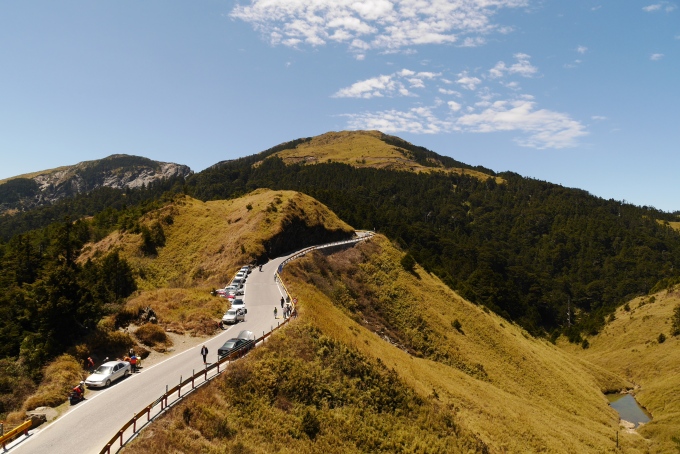 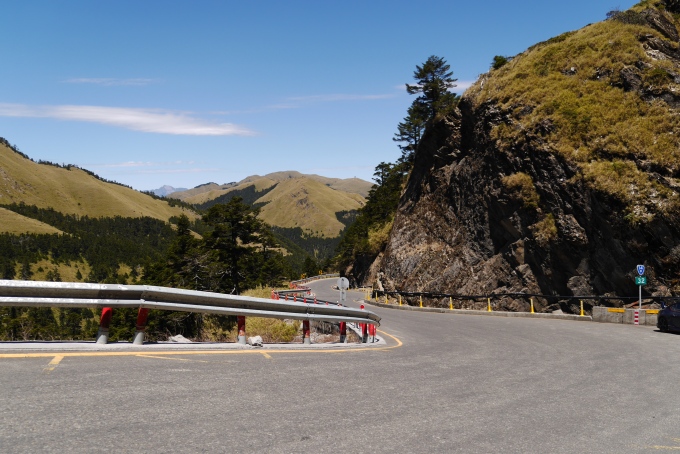 View from the highest point at Wuling

The road down towards Taizhong

I know the top station at Wuling is a popular spot for sightseers but there hadn’t been much traffic on the way up so I was a bit surprised to find a massive traffic jam at the top. Normally you don’t notice the high population density of Taiwan but it’s occasions like this that you realize that cramming 23 million people into a country the size of Belgium, with a good portion of the country taken up by uninhabitable mountains, will create crowds in otherwise unlikely places.

The traffic jam at Wuling

The ride down from Wuling was really fun, smooth asphalt and a good amount of curviness all the way but when we were more or less down on the plain it started to feel a bit tiring. I guess that has to do with the fact that we rode the longest distance that day and honestly, though it feels strange to say, even good roads like that get a bit too much after a while.

The last day was just the straight, boring red light infested road back to Hsinchu, all I have to say about it is that we made surprisingly good time, only three hours including breaks.

Some quick notes for anyone wanting to do the same route:
A standard 125 or 150 CC motorbike normally has a 5 liter tank which should last around 150 – 200 km. The petrol stations are few and far between, there is one not far from where we stopped the first night, and one in Lishan. Luckily, the distance between petrol stations is slightly les than the range of the average motorbike so if you fill up every morning you should make it, no problem.

Accommodation in the mountains is limited so if you want to be sure to have a place to stay, book in advance. This is extra important during national holidays, normal weekends it could be possible to walk in.