Always on the lookout for places to go and things to do my wife recently used her googling skills to find a hiking trail and waterfall in the nearby mountain area that we hadn’t been to yet (good work Honey). It seemed like a fun trail, so today we decided to go there. We took the motorbike up to the mountains and parked at the trail head; from there it was only a few hundred meters to the waterfall. Since it was a pretty hot day, the pool of clear, turquoise water at one the steps of the fall looked very inviting so we decided to go for a swim. It was pretty cold, Taiwan’s rivers always are, but refreshing; you could even climb up and sit right in the middle of the fall. 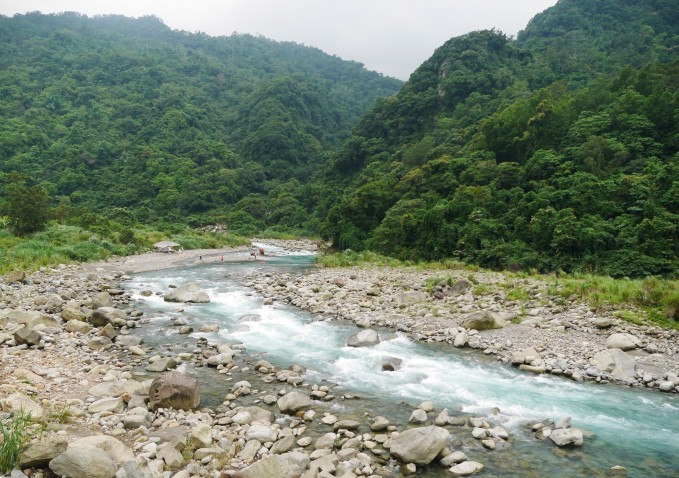 The river seen from the road on the way up

A lower level of the waterfall 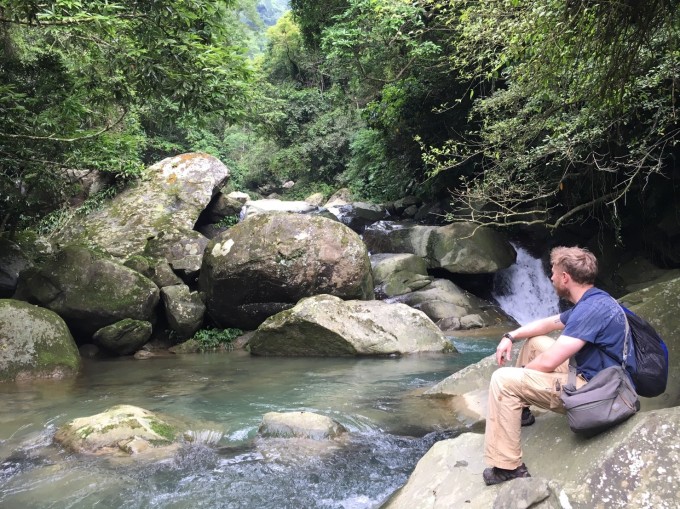 Taking in the moment 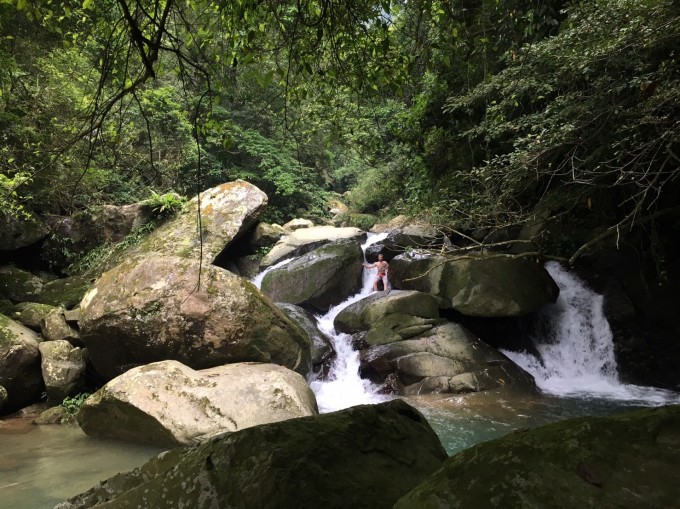 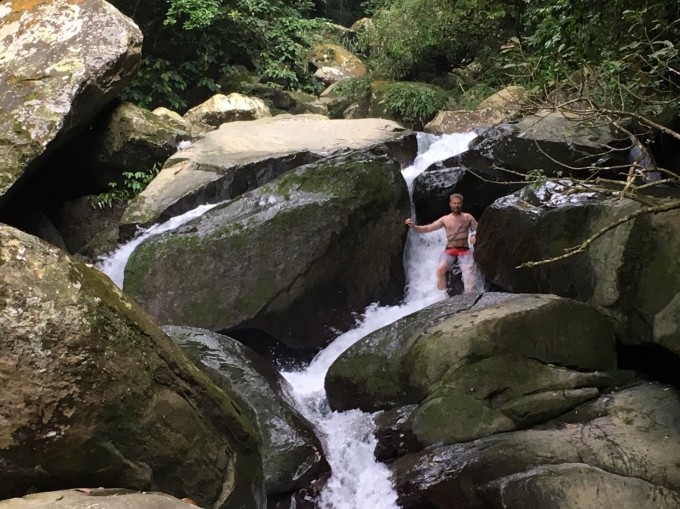 I am sitting in the waterfall

After the swim we continued our hike up to a dilapidated old pavilion at the crossroads between our trail and another one coming from further down the valley. Here we could have turned back down to the nearby village of Neiwan but we went the other  way instead. Soon after that we came to small bridge across the river. I’m pretty used to suspension bridges by now but this one didn’t even have a deck to walk on, just two thick ropes side by side, luckily it wasn’t very high over the water otherwise it would be seriously scary. 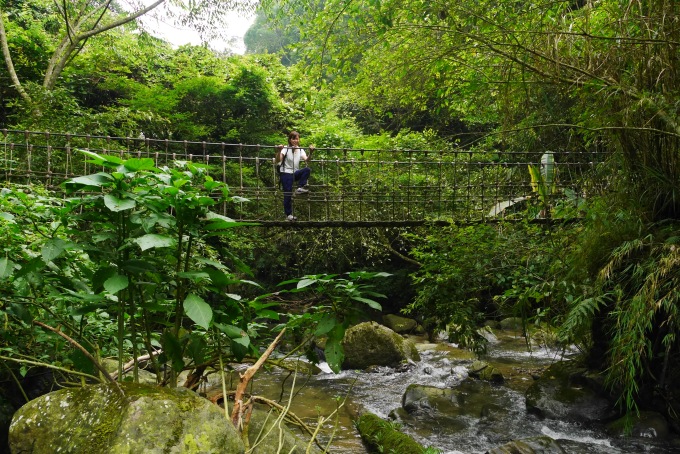 Yini on the bridge

This is how narrow the bridge is

Once across the bridge we continued upwards and deeper into the jungle. Unlike most trails in this country, this one wasn’t a neat boardwalk made for old people and little children, but a proper jungle trail. It was rocky, muddy and uneven, a narrow path cutting through the undergrowth or clambering along the edge of hillside. I enjoyed walking such an unspoiled trail but it was hard work and soon I was hoping for a second waterfall to cool off in; alas by that time we were past all the places where we could access the river. 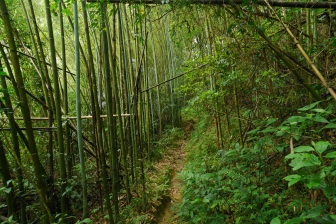 Some shots along the way after the rope bridge.

After about an hour of hiking we came out on the road and started walking back towards the parking lot. It’s quite a distance, according to google maps little of four kilometers, and it would have taken us another hour of rather boring road to get back to the motorbike but we were lucky and managed to hitch a ride.

Since we hadn’t eaten anything since breakfast, we went into Neiwan to get something to eat, then headed over to a nearby hot spring resort to relax. In this kind of weather it might seem counter intuitive to go to a hot spring but the warm water is good for easing some tension in your muscles, plus there is always a cold pool you can sit in to chill down a bit.

That was the end of our day in the mountains and just as we were leaving the gods of nature decided to wave us off with a magnificent sunset. 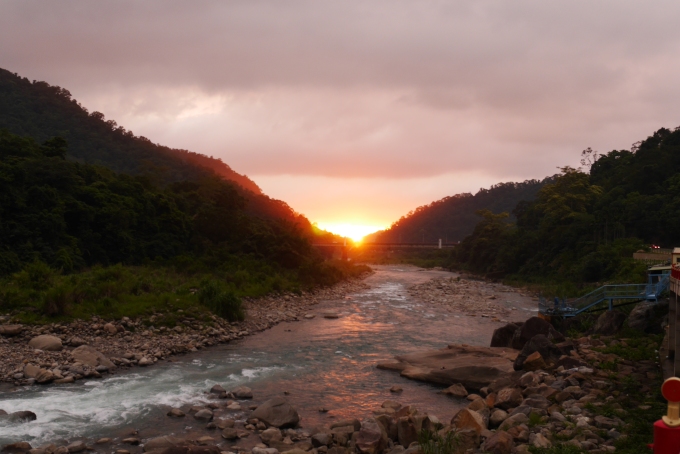 The trail we walked is called Matai trail and it’s only a short distance from the popular mountain village Neiwan. I really liked it for the simple reason that it is a proper jungle trail, not the typical boardwalk. I recommend it for anyone who likes hiking, like I mentioned a fair bit of it is upwards but it’s not too bad and it’s a good afternoon hike. If you are interested, here is where to find it:

The trail is the dotted red line, as you can see there are two parts, one starting at Nanping just acrosss the Neiwan bridge, and one starting a little bit further upstream. They come together at the little pavilion (marked as a black house) and lead up to Zihing.

We entered the trail upstream from Neiwan, to get there just follow the main road out of town, when you see the pink bridge turn right and cross the river and you are there. There is a small parking lot right next to the trail head if you are coming by car or scooter. 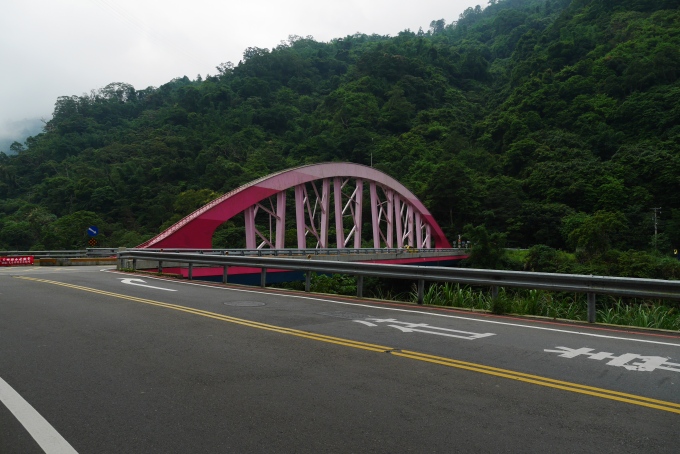 Turn off the main road and cross the river on this bridge, the trail head is just on the other side

The parking lot is just to the right of the map billboard, the trail head is slightly hidden in the bushes to the left.

When you are hiking it is sometimes hard to see the trail, luckily some mountaineering club has set up little plastic trail markers to make it easier for people, so just follow them. Whichever entrance you chose, you will get to the pavilion where you have to decided which road to take, one arrow points back to Neiwan, on down to the pink bridge and one up towards Jianshi which is what we took today. The rope bridge is on the way to Jianshi and the waterfall is between the pink bridge and the pavilion. 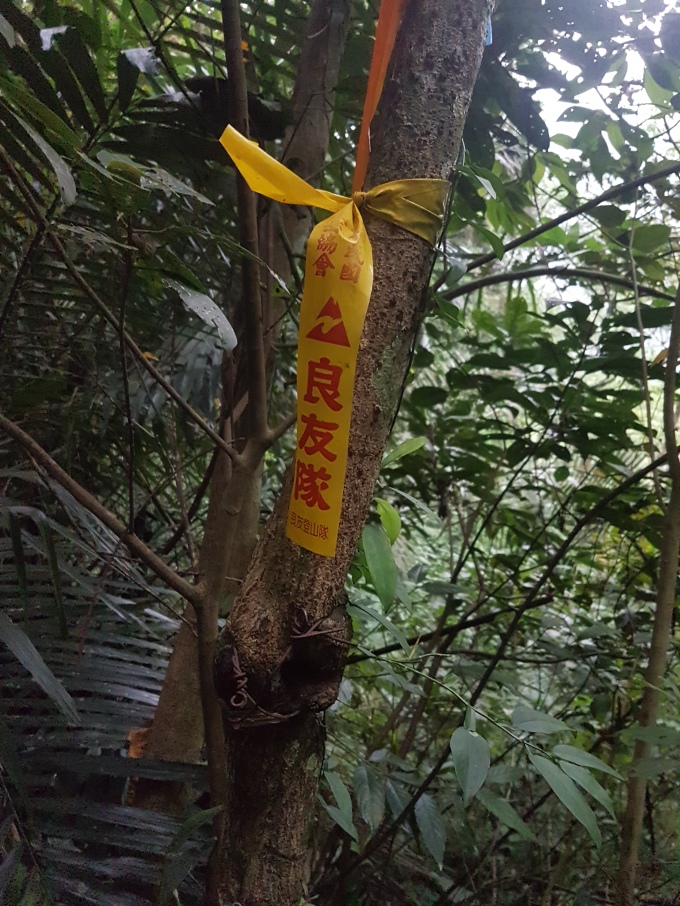 The red ring shows the arrow pointing to Jianshi.

When you get out on the road you are at some kind of farm, just turn left and follow the for a few hundred meters until it joins a bigger road, soon after you should see a school on your right. From there it is about four kilometers back to the pink bridge, mostly down hill so don’t worry too much. The entire round trip should take about three or four hours depending on how many stops you make. If that is too long you can turn back after the rope bridge, and just take the trail down to Neiwan.

The trail ends at this farm

The point where the trail meets the main road.

Note: there are lots of insect in the jungle so put on some mosquito repellent before you start hiking, and remember to bring plenty of water. 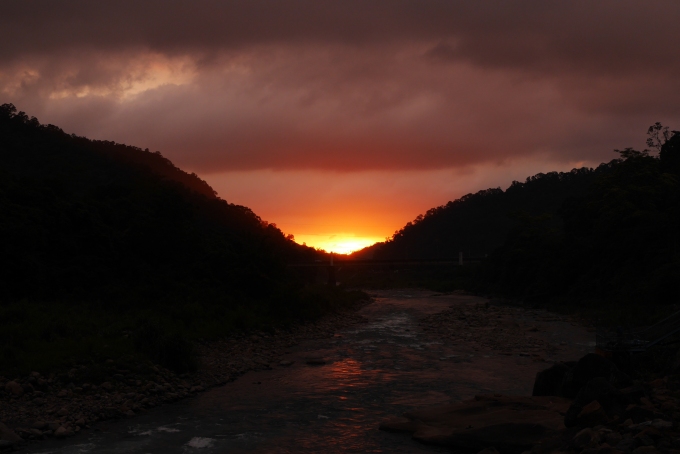 A final shot of  that gorgeous sunset to end the post.