In my last post I wrote about going swimming at Long Dong. I mentioned that people also go there for climbing, and since I like climbing I’ve been thinking of going back there for a while. This month, the authorities have decided that Renegade Wife can’t leave the city, that is she has to go to work on Saturdays. Not wanting to stayed cooped up at home every weekend, I decided to go by myself.

I took off right after work on Friday afternoon, steering my trusty motorbike towards the north-east. The road out to the coast is pretty mountainous an I don’t like riding mountain roads in the dark, so when I got to Taipei I found a hostel and stopped for the night.

On Saturday morning I set off again. Normally I don’t have a problem riding a motorbike in the city, you have a lot better spacial awareness than in a car and you can often weave through the traffic jams. Taipei however, is a lot bigger than both Hsinchu where I live, and Taoyuan where I work. Because of its size, there are plenty of bridges, elevated roads and complicated intersections, that make it extremely difficult to navigate. Add onto the confusion the trapped heat from hundreds of vehicles and you got yourself a traffic nightmare. For situations like this I really wish my bike had a GPS…and an AC.

After about an hour of careful driving and several wrong turns I was finally out of the city center, and on the correct road even. From there out to the coast it was a pretty good ride though not as nice as some of the mountain roads. I arrived at the coast around noon, grabbed some quick lunch then headed down the coast towards Long Dong.

To go climbing in Long Dong you need equipment, which I don’t have, you need to know lead climbing, which I don’t, and you need to know the routs, which I also don’t. Instead of real climbing my idea was to do a bit of what is usually called scrambling, a combination of walking, jumping and climbing to move around in uneven terrain, sort of like parkour for rocky terrain. My idea was to go a few kilometers past Long Dong, scramble across the beach, then walk back along the road. When I got a few hundred meters past Long Dong however, I realized that that wasn’t going to work because the beach was blocked by some kind of resort. Instead i parked at Long Dong and started scrambling along the beach, thinking I could turn around when I got to the resort.

It was mid day when I started, the sun shining brightly on me which made it hot and sweaty but it was still great fun to jump from boulder to boulder and climb along the cliff faces. That the landscape is gorgeous also helped to make it a good experience. 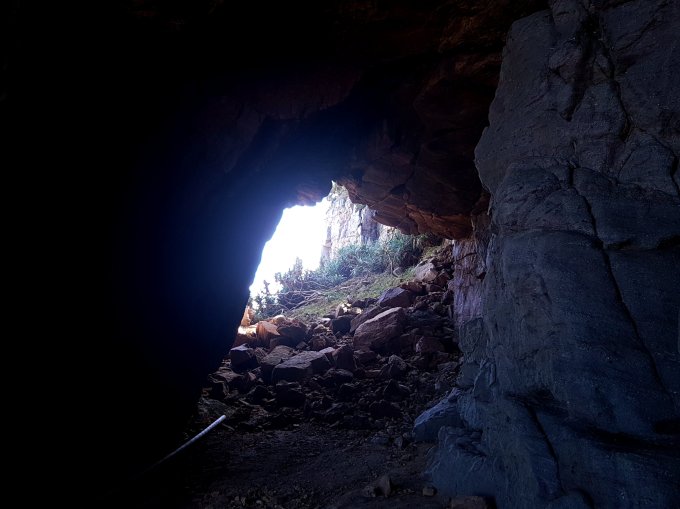 A cave going through one of the large cliffs

After about a kilometer, by my calculation just before the resort, I had to stop because the beach simply ended, a sheer cliff face shooting up from the water in front of me.

The end of the beach

I stayed at the end of the beach for a little while, just enjoying the landscape before heading back.

Just as I was thinking to leave a fisherman came by looking like he was heading home. I asked if there was a road and sure enough, he pointed out a small trail leading up to the hiking trail on the ridge above. Instead of going back over the beach I decided to follow him up.  It was a hard climb on the steep, rutted trail and I was breathing hard by the time I got up; in hindsight scrambling back along the beach might have been a better option.  When I got back to Long Dong I was pretty much drenched in sweat, so I went back down to the beach and went for a swim in the cool water, jumping a couple of times from the cliffs. It as a great way to end my little adventure.

When I had cooled down a bit from swimming, I packed up my stuff and got back on my bike heading for home with t the setting sun shining into my eyes. Road number two, which hugs the northern coast line of the country, is often crowded but if you can be there without the traffic it is a great road for riding. I was lucky enough to avoid the worst traffic and I thoroughly enjoyed myself until I reached the more populated areas closer to the city.

I had originally planned to go straight home but when I reached central Taipei I was getting tired and I didn’t feel up for the remaining three hours or so from there to Hsinchu. Instead I found my way back to the same hostel I had stayed at the night before and called it a night. This morning I was up bright and early and after only a few wrong turns on my way out of Taipei, I got home shortly before noon.