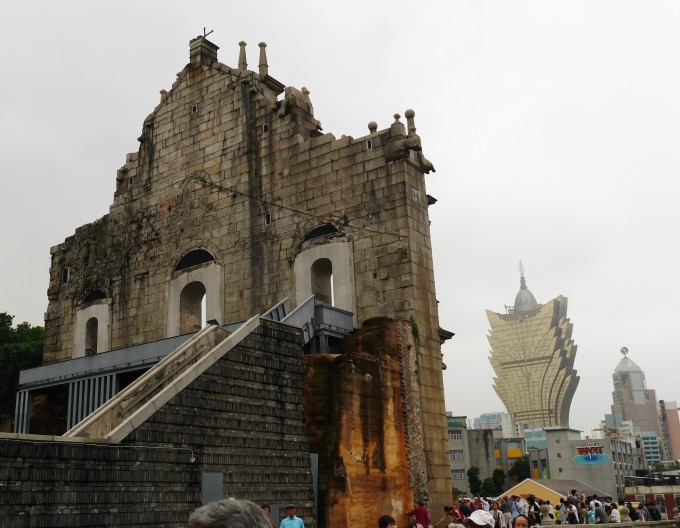 Macau is most famous for its many casinos and I believe most visitors come here for a day or two to do a bit of gambling. Although the casinos are ever-present, the Cotai Strip defining Cotai island, and the Grand Lisboa looming over the old city like a benevolent golden giant, there is more to this city than just gambling.

Macau is a small country and you can check off the major tourist attractions within a day or two, so unless you plan on spending a lot of time gambling, it’s not really worth it to fly around the world just to cone here. I do however think there are some interesting sights to see, so if you’re in a nearby country taking a weekend trip could be a good idea.

Before I go into the details on the spots to visit, here’s a bit of orientation: Macau consists of two parts, the Macau peninsula in the north and the large islands Cotai in the south. Officially Cotai consists of three parts, the islands Taipa and Coloane, and an area of reclaimed land in the middle, but nowadays those are just different areas. The old town is located on Macau peninsula while the Hong Kong ferry terminal, the airport and most of the big casinos are all on Cotai. For getting around I find it easier to walk than take public transport; the distances are short, the bus routes are a bit tricky to figure out, and if you include waiting times, walking will be quicker and more convenient.  For me the only reason to take a bus is to move between Macau peninsula and Cotai.

The Casinos
Even if you don’t plan to gamble, you should definitely check out the casinos. The big, palace like buildings are an impressive sight during the day and even more so at night when their facades are lit up. They really exude that feeling of glamour and luxury that is associated with Las Vegas. I only went inside two of them, The Grand Lisboa and The Parisian and in both of them entrance was free and i believe it is in the others too, so it’s no problem to go take a look around. While I didn’t gamble it’s interesting to just stroll around the casino floor and take it all in. Something else worth seeing is the fountain show in front of the Wynn Palace. It is reminiscent of that famous fountain in Las Vegas that you see in so many movies, with jets of water dancing in the light. It takes place in the lake/pond in front of the Wynn palace and you can see it from the lake side promenade or from the free cable car. The show starts every 15 or 20 minutes from some time in the morning until midnight. The Grand Lisboa is located on the peninsula, all the other big ones are located on Cotai. You can take a bus from the big station right across the street from the Lisboa to The Venetian, right at the top of the Cotai Strip. Note that the Wynn Palace with the fountain show is the one on Cotai, NOT the one next to the Lisboa. 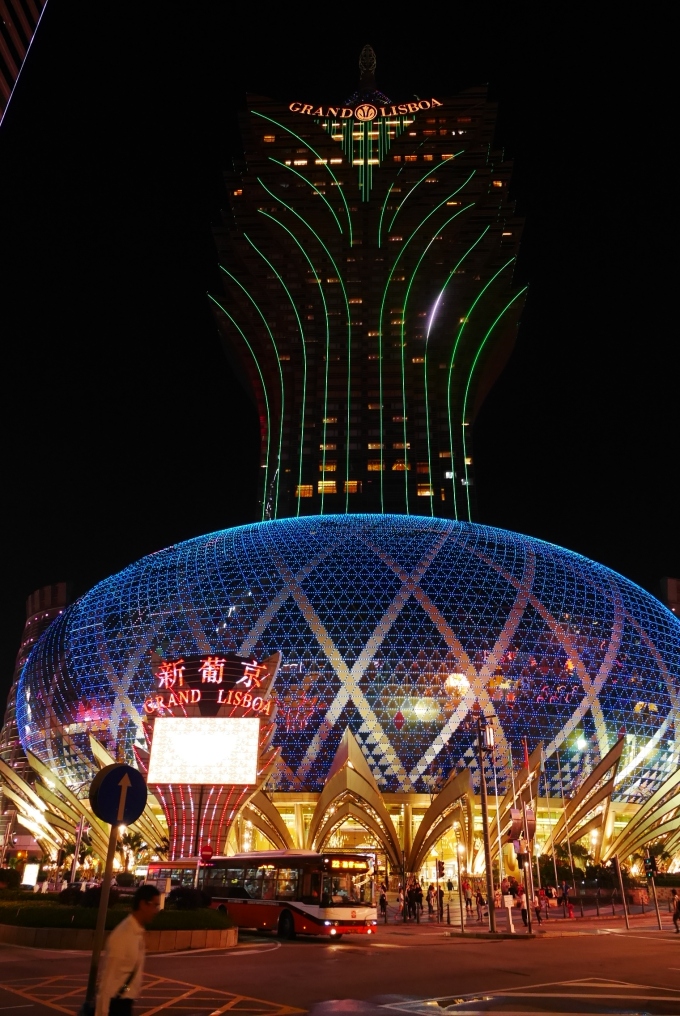 The Grand Lisboa at day and night 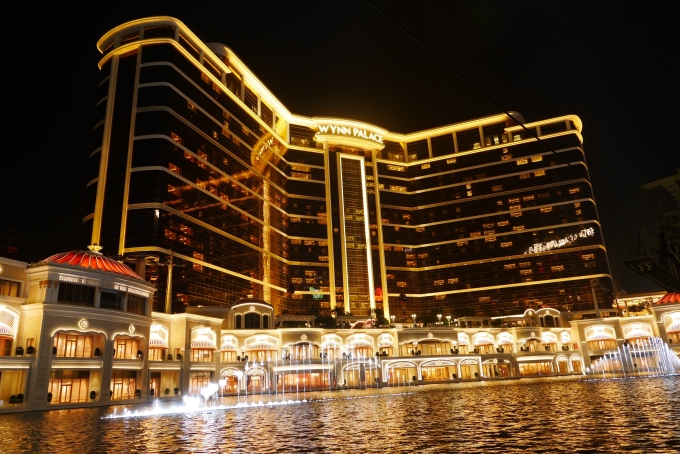 Wynn Palace and the show lake

The light and water show

Check out the fancy interior of The Parisian

Sendao square and Monte Fort
Senado square is the main square of Macau old town and a lot of the main tourist attractions are either on the square itself or a short walk away.  The square is interesting because it looks very much like a town square somewhere in southern Europe – if it wasn’t for the Chinese characters on the shop fronts you’d think you had teleported to Italy or something.  At the east end of the square lies St. Dominic’s church and a short walk from there you have the Ruins of St. Paul’s. Only the front wall of this old Jesuit church remains, apart from the casinos it is one of Macau’s most famous landmarks.  Right next to the Ruins of St. Paul’s lies the Monte Fort fortress which houses the Macau museum.

Senado Square lies on the eastern side of Avenida de Almeida Ribeiro which is the main road going through old town Macau. It runs diagonally from the waterfront in the north-west, all the way down to the Grand Lisboa and is a great aid in navigation when strolling around the city.  A block west of Avenida de Almeida Ribeiro lies Rua da Felicidade or “Happiness street”. This used to be the red light district of Macau with brothels and opium houses lining the street; nowadays those things have been replaced by regular stores but it’s worth a visit for the quaint old buildings.

Senado square sign, I love the way they have both Portuguese and Chinese on the street signs 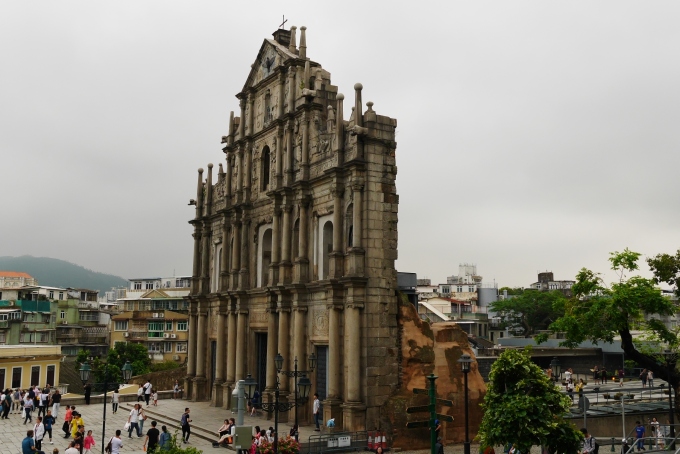 The Ruins of St. Paul’s

A small Chinese temple right next to the Ruins of St. Paul’s

Part of the fortifications at Monte Fort 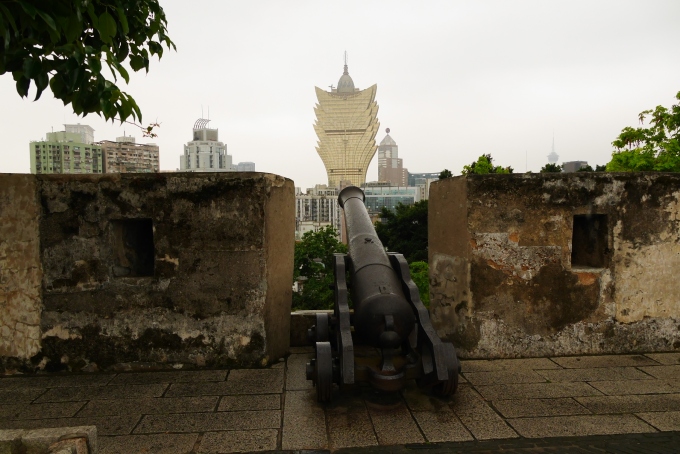 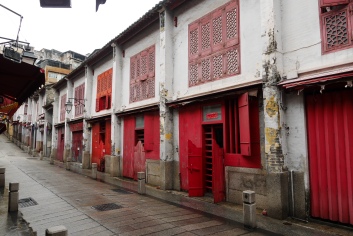 Guia Hill
If you venture a bit further east from Monte Fort you will come to Guia Hill. This is, as the name implies a large hill and on top of it is a small fortress and a lighthouse. Neither the fortress nor the lighthouse is spectacular in any way but if you have a bit of time to kill it’s a decent place to visit. 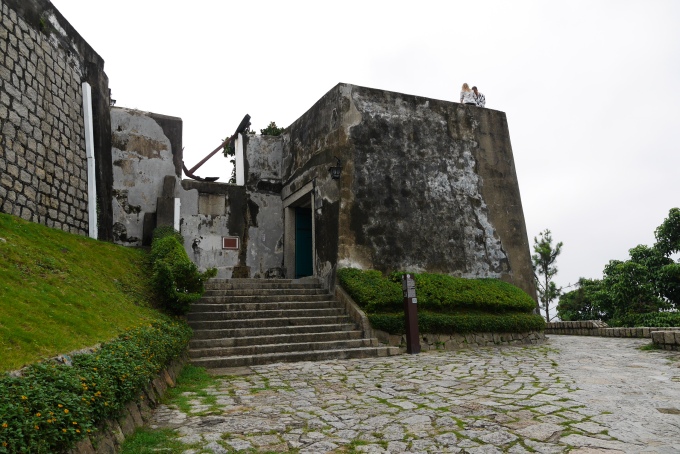 The lighthouse and the small chapel next to it 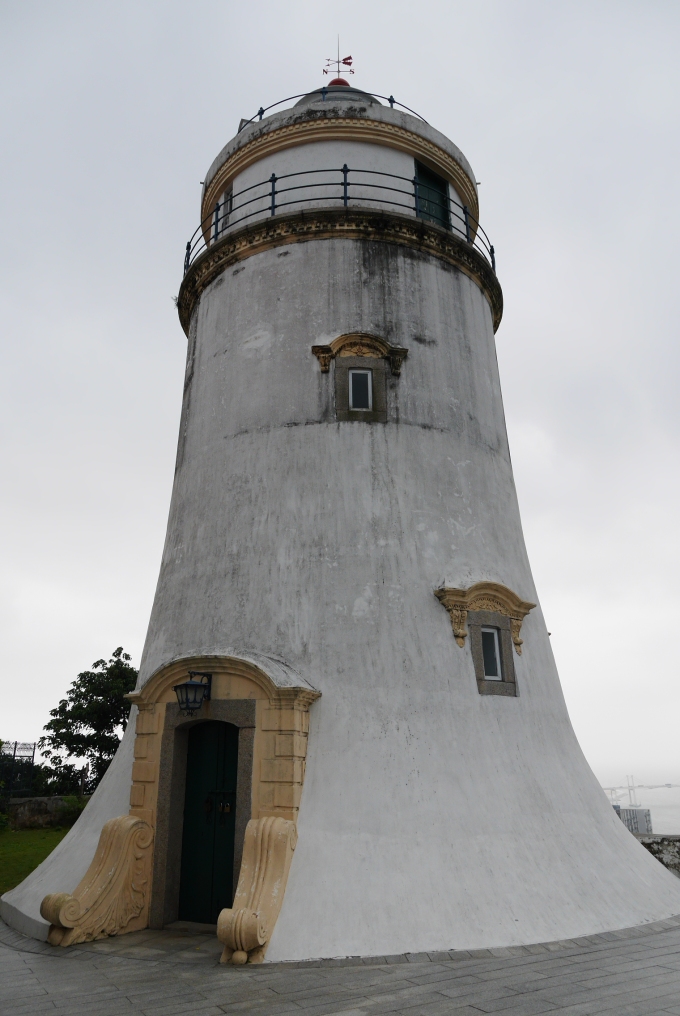 The lighthouse in a bit more detail 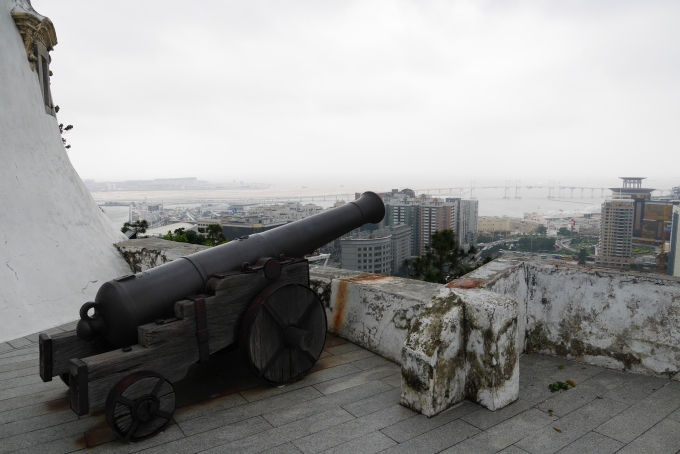 The view from the top. The water that you see here is the ocean and if you keep going you should reach Hong Kong

Southwestern  end of Macau peninsula
At the southwestern end of Macau peninsula, you have a couple of tourist attractions within a short walk from each other. The best one in my opinion is the Chapel of Our Lady of Penha which lies on top of small hill. The church itself is nothing special but you get some pretty good views of the city from there and unlike the Macau Tower it’s absolutely free.  Coming down from Penha church you  will be close Mandarin’s House which is an old house that belonged to the Chinese poet Zheng Guanying (鄭觀應). I don’t know much about the man but I find it interesting because it was built in a mix of Chinese and Western architecture.  In the vicinity of Mandarin’s house you have the Moorish Barracks which used to house a regiment of Indian soldiers, and the A-Ma temple which is one of the oldest Buddhist temples in Macau. For me these were nothing special but if you’re strolling around in the area you can always stop by for a quick visit.

The Chapel of Our Lady of Penha 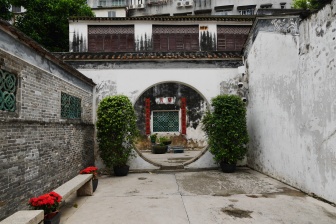 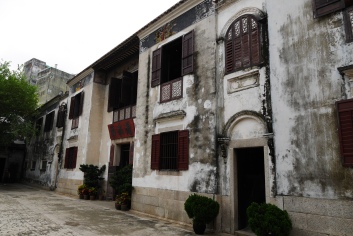 I love these rounded doors

The courtyard has some clear western influences. 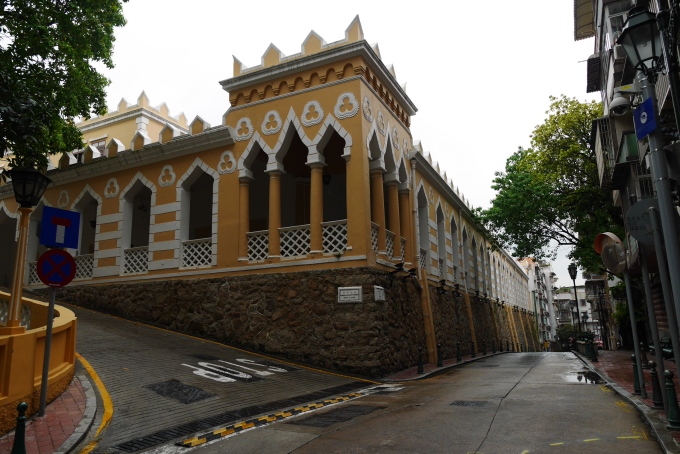 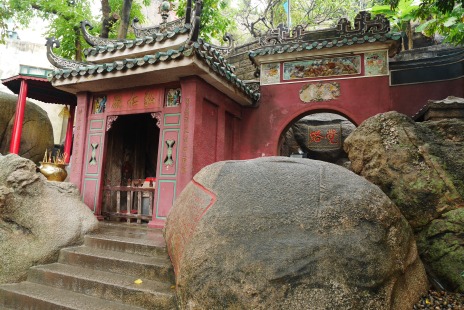 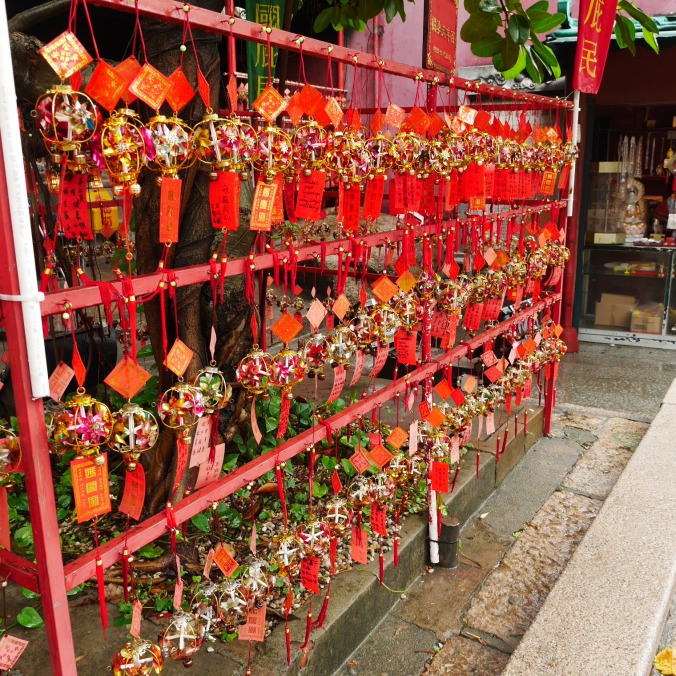 Coloane
Down at the southwestern end of Cotai lies the small village of Coloane. It’s one of the more distant places you can go to so I highly recommend taking a bus or taxi. It’s a very small village, just a couple of streets and many of the houses are crumbling after years of disuse. A short distance up the road from the village center lie several abandoned shipyards so i can only guess that the people living in those now vacant houses used to work in the shipyards. There aren’t any particularly noteworthy things to see, both the church and the Buddhist temple are small and uninteresting, but I think it’s a nice place to go for a stroll in. Funnily enough, Lord Stows bakery, one the best bakeries for buying Macau’s famous egg tarts, is located here. So if you make it all the way out here, be sure to buy an egg tart.  If your main interest is famous buildings and such, you probably shouldn’t bother coming all the way to Coloane but for me, walking around among crumbling houses holds the same kind of charm as exploring more spectacular abandoned buildings – it’s kind of Urban Exploration light.

This house is absolutely filled with Chines New Year decorations 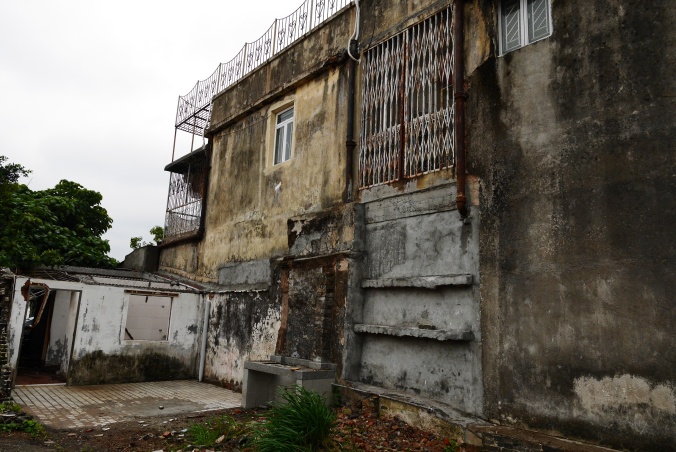 Right next to those two abandoned houses are these colorful ones 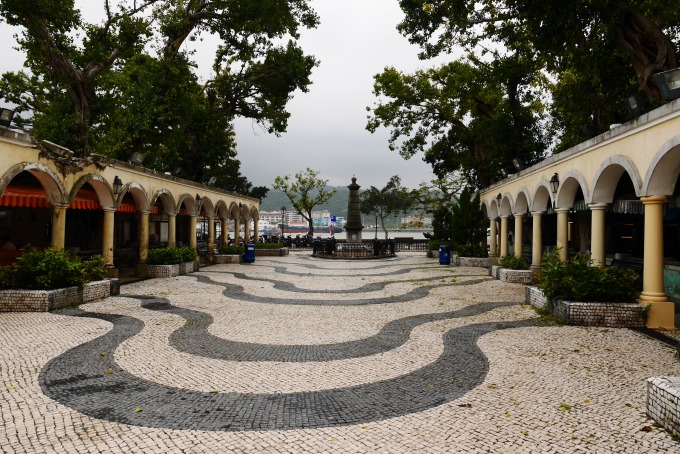 The church square, note how the roof on the left arcade is broken 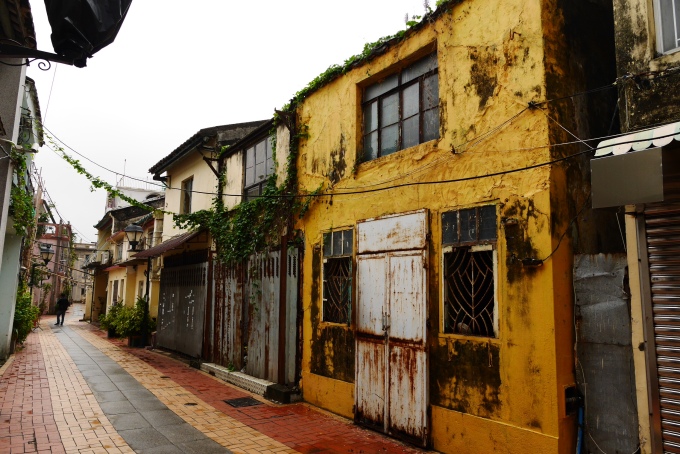 One of the small streets 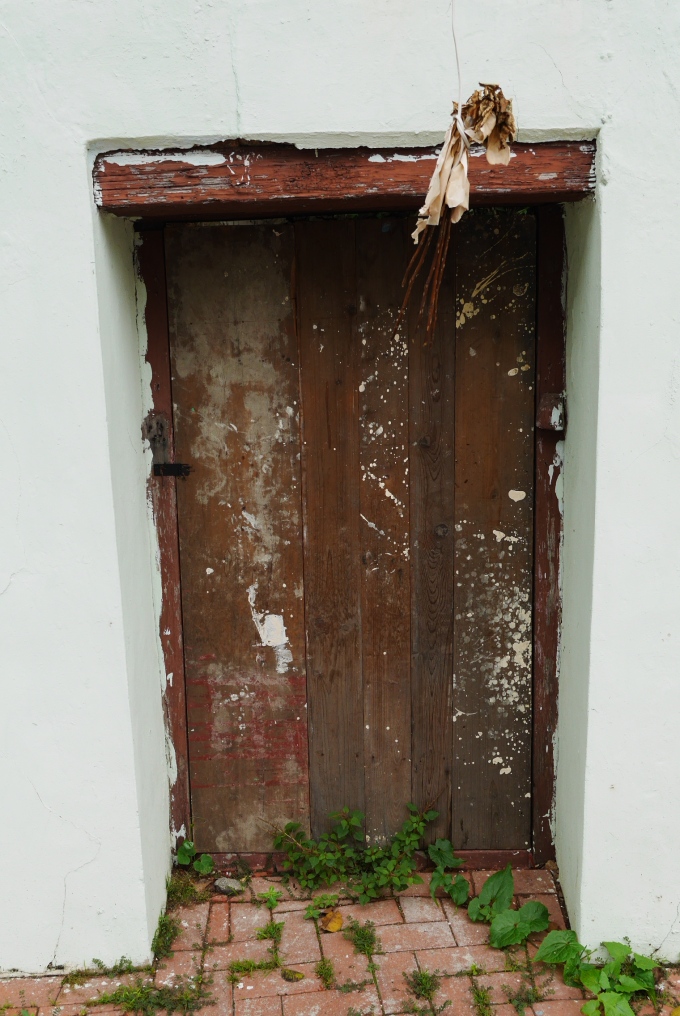 Old door that never gets opened

Some of the abandoned shipyards just north of the village.

Food
Considering the Portuguese heritage you’d think you could get some nice food in Macau but I tried two highly rated Portuguese restaurants and I was kind of disappointed. I don’t want to mention them too much because it’s not worth it. I do however want to warn you about Boa Mesa just around the corner from Senado square, the food is really bad, stay away. The one thing you should eat in Macau is egg tarts. Like i already mentioned, Lord Stows Bakery in Coloane has some really good ones but I actually prefer the ones from Margaret Egg Tart Shop which is conveniently located just two blocks north of the Grand Lisboa. Locals also enjoy something called pork chop buns, basically they are bread buns, similar to small baguettes, with a deep-fried pork chop inside. On the last day I accidentally stumbled upon a back street with some small shops selling them and other local food. You can find it here:

This is a rough estimate of the area, there are other similar restaurants just nearby.

City of contrasts
Except for the casinos, which are indeed impressive, the tourist attractions in Macau are really not that spectacular; you can find other much more interesting places to visit in nearby countries. That being said, I greatly enjoyed my trip to Macau. My favorite thing was not any tourist site in particular, but rather to go strolling around in old town and explore the narrow streets and alleys. A lot of it looks like Coloane but on a much larger scale and there’s something about all these old, dilapidated buildings that really speaks to me. I know this kind of thing probably doesn’t appeal to the average tourist but I find it fascinating. I especially love the contrasts that you see in this city: You have old colonial style buildings with shop signs in Chinese in true east meets west fashion. You have apartment buildings with dirty facades, laundry hanging to dry on caged balconies a short bus ride away from the palaces like casinos. Most striking of all, you have buildings so broken down you think they will collapse within spitting distance of the golden gleaming Grand Lisboa. 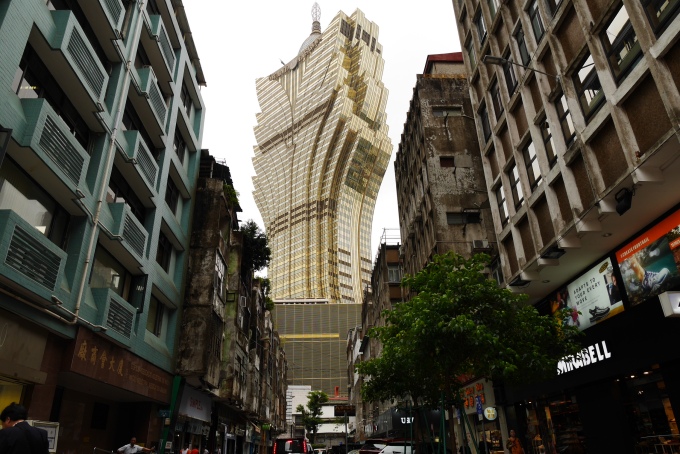 I believe this image perfectly encapsulates that contrast 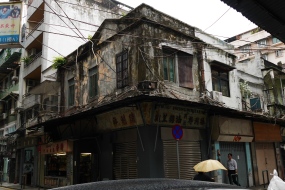 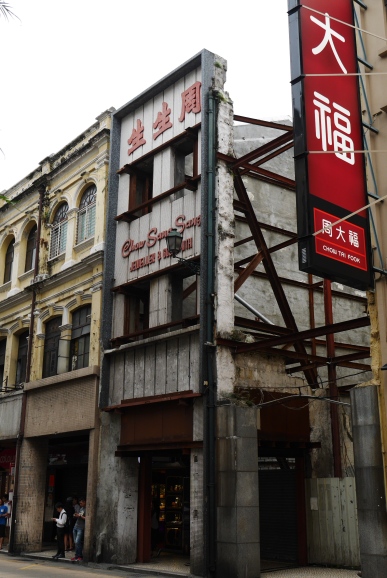 Another interesting thing I noticed while walking around was that many of the buildings have tiny little shrines just beside the door. I guess they are there to protect the building or something similar. I’ve noticed them in Hong Kong earlier but never paid too much attention but this time I kept a lookout, I think they are really cool. 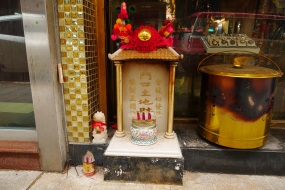 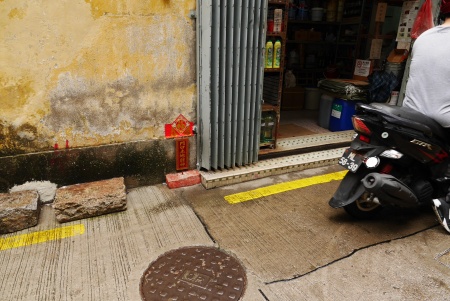 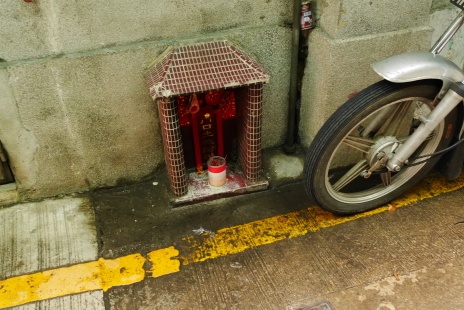 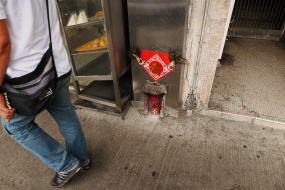 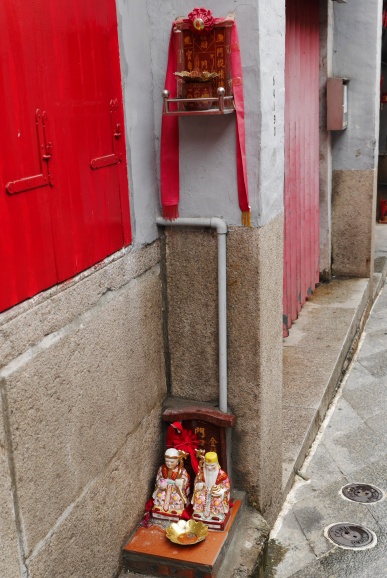 In the end then, I think Macau might not have all that much to offer for the run-of-the-mill tourist. The casinos are impressive and some of the tourist attractions like Senado square and the Ruins of St. Paul’s are worth a visit but that’s about it. However, if you’re as fascinated as I am by old, dilapidated buildings, and the contrasts between east and west, new and old then you should definitely come check out Macau.

Finally I just want to give a shout out to my lovely wife who gave me this trip as a birthday present. Thank you honey.