This post is a bit late because I’ve been busy but now I finally have time to write.

A couple of weeks ago I was in a camping gear store looking for something when a man came up to me and asked something. I couldn’t really give him a proper answer but we started chatting and soon enough he had invited me to go river tracing. I’ve been interested in going for a while, but I’ve just never taken the time to arrange a tour, so when the opportunity came up like that, I happily agreed to join.

At first my wife was planning to join as well but she had some work to do so in the end it was just me and my new friend David. We set off on Saturday morning and drove down to Taian in Miaoli. We parked the car, loaded our gear into the watertight backpacks that David had brought, put on our river tracing shoes (similar to wetsuit shoes) and set off down the trail.

After a few hundred meters we left the trail and took a small side path through the bush down to the river. From there we hiked partly along the river bank, and partly in the knee deep water up to the Dashimen waterfall. It was nice but not as adventurous as I had expected. 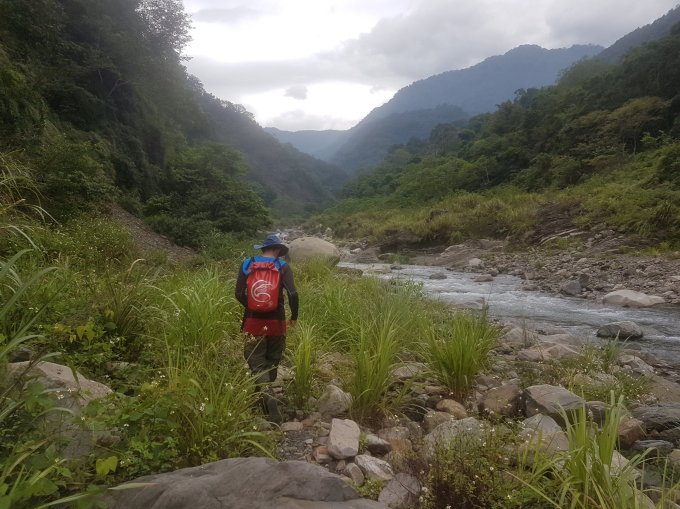 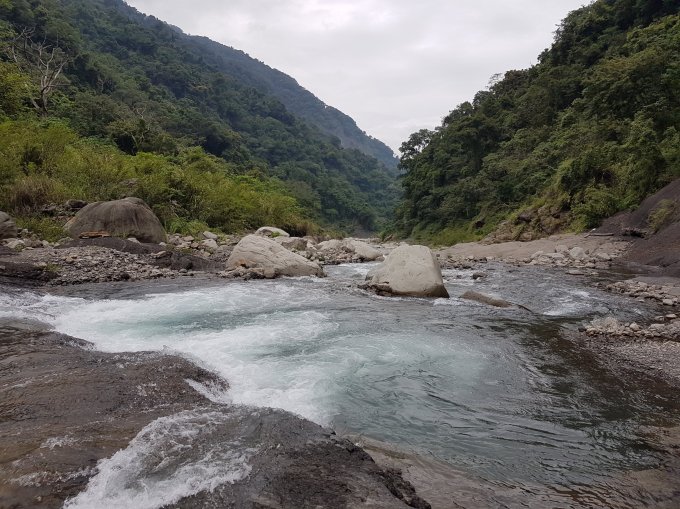 The view downstream from the Dashimen fall

We had originally planned to do a few jumps when we got to the fall but because of the previous day’s rain, the current was too strong. Instead we headed around the falls and further upstream.

After we reentered the river upstream from the Dashimen fall it only took us about 100 meters before we reached the next big waterfall, Shuiyun Falls. This one is really spectacular with the water crashing down from a cliff high above the river, throwing spray high into the air. To get there we had to walk through waist deep water, and cross a stream that could easily have swept us off our feet if we weren’t careful. I must admit I did feel a little bit nervous when crossing the stream but it was worth it for the awesome feeling of standing at the bottom of that fall, feeling the spray like mist in the air and hearing the incessant booming sound. 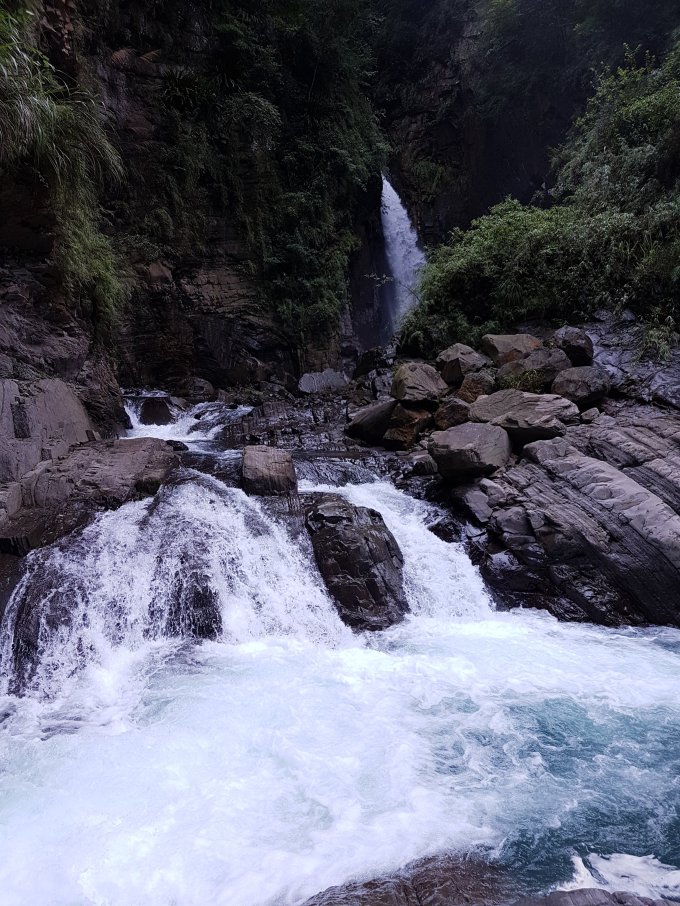 Seeing the fall from the other side of the river

Feel the spray, hear the noise, sense the power

You might think that such an awesome sight might be the end of the track but no, there was more ahead. We kept hiking for a few kilometers, sometimes walking along the river bed, sometimes clambering over or around big boulders, and sometimes wading through the rushing water to get across the river. This was exactly the type of thing I had expected from a river tracing tour. 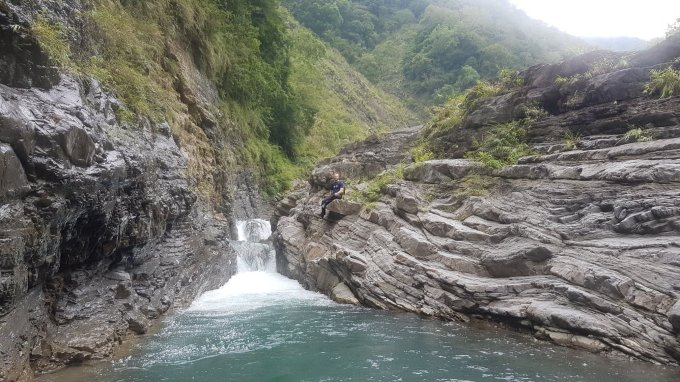 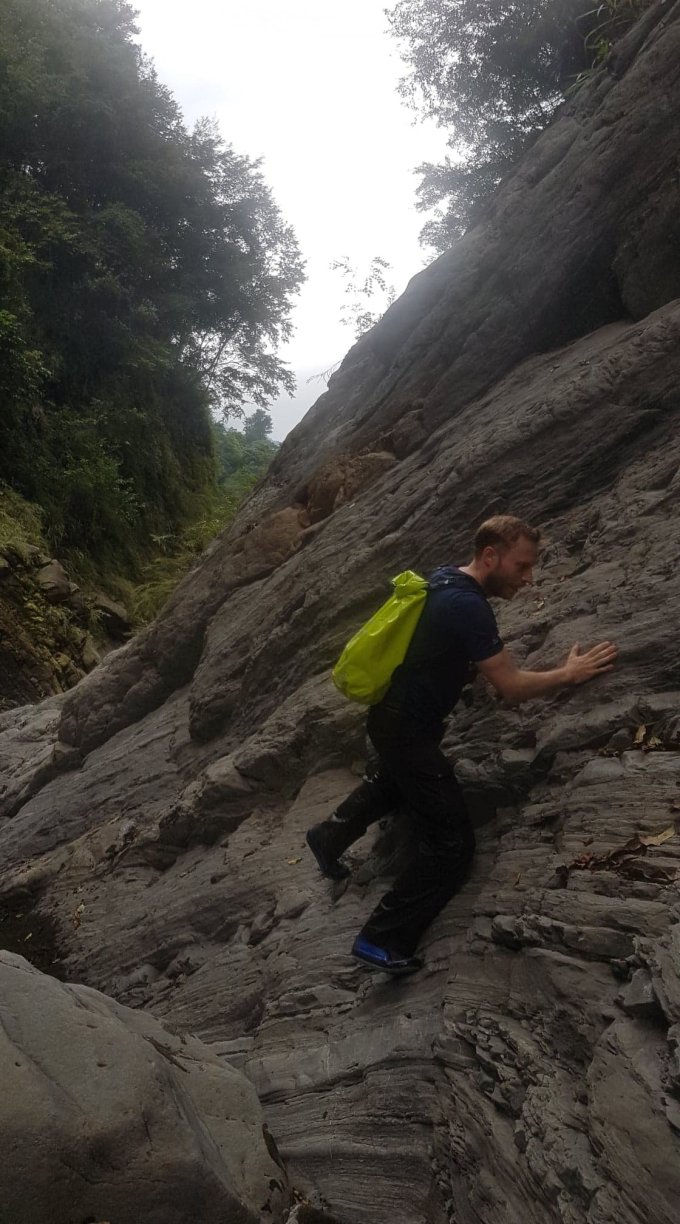 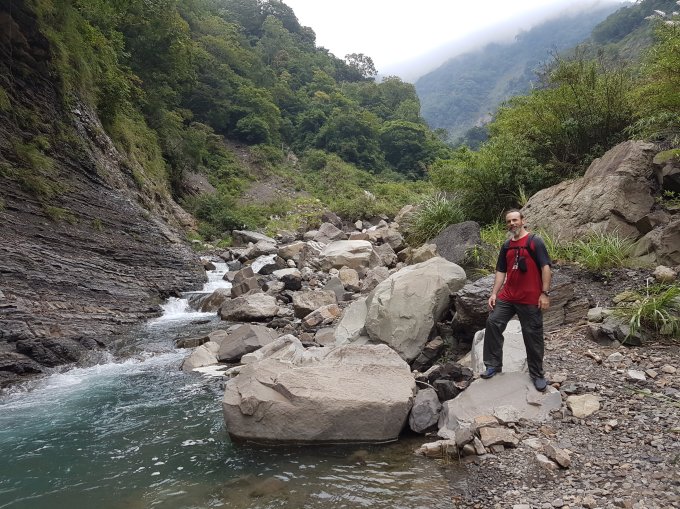 Views along the way

After an hour or two of walking we stopped for lunch. Sitting on a log in a remote(ish) river valley taking in the beautiful landscape while you eat is great way to have lunch. Once we had eaten the real adventure started. Right around the corner from the spot where we had eaten our lunch, we came to a steep, two level waterfall. It wouldn’t normally be climbable (unless you were very skilled) but someone had fastened a rope at the top so we could get up. I have to tell you, climbing up with a torrent of water coming down on your head is something else.

The bottom if the fall, notice the rope on the left just by the smaller stream 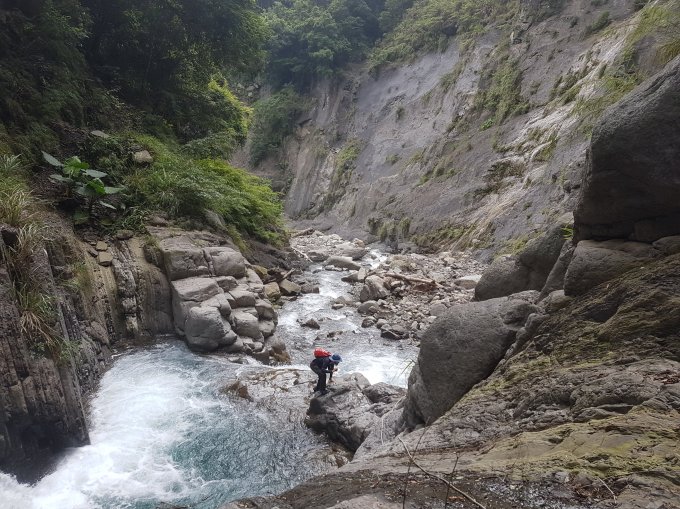 Looking down from the top

Video of David climbing up

The view upstream from the top of the two level fall

We kept walking and not hundred meters from the two level fall we came to the next one, which was even more awesome than the Shuiyun fall. This (as far as I know) unnamed fall is probably 15 meters high, with masses of water thundering down into the turquoise pool at the bottom.

First view of the awesome fall

At first it looked like this might be the end of the road but soon enough we found another rope. David went first to check the safety and I followed. Climbing the smaller fall had been an experience but this was on an entirely new level. I honestly cannot put into words how cool it is to stand ten meters up a near vertical cliff, a massive waterfall just to the side of you, knowing that you could die if you lose your grip on the rope. It is a visceral experience.

Video of me climbing up

View from the top

Having cought our breath after climbing and taken in the view, we set off upstream again. We walked for a kilometer or so, seeing the remains of rockslides on both sides of the river, passing them as quickly as possible to avoid any possible danger. Finally we reached a point where the river valley narrows down to a canyon and a big boulder, about the size of a house, blocked our path. On one side of the boulder there is a gap where the water comes through, forming a waterfall. David, determined to keep going, made several attempts to climb through it but eventually had to give up. With the high water levels from the recent rains it was too risky.

The giant boulder blocking our path

David under the boulder, soon after giving up climbing the waterfall

A bit saddened by the fact that we couldn’t go further, we turned around and started walking back out. There was plenty of wading in deep water, clambering over rocks, and crossing swiftly flowing streams on the way out, just like there had been on the way in. However, by now I was more used to it so it didn’t feel quite as exciting as when we were coming in. I will admit though, repelling down that 15 meter waterfall was just as exciting as it had been going up.

Video of David as he repels down that magnificent waterfall

I was pretty tired when I came out from the river, what with walking some 15 kilometers over rough ground and all. That didn’t matter though, because I had an awesome day: walking through the gorgeous landscape, green hills on both sides, the clear blue river and one spectacular waterfall after the other; the sense of adventure and excitement when crossing a stream or clambering over some boulders; above all the exhilaration of climbing a near vertical cliff right next to a thundering waterfall. I’m not sure when I will have another chance, but I will definitely go river tracing again.