I should have published this a couple of weeks ago but I’ve been too busy.

Most people who like traveling know about visa runs, taking a short trip out of the country so as to receive a new entry stamp when coming back. I have a residence permit in Taiwan so I don’t need to bother with my visa, but I do need to make passport runs every few years. Basically, the Swedish system forces you to go to an embassy in person to get your passport renewed. Taiwan doesn’t have a real embassy so I have a good excuse for taking a short trip to renew my passport once every five years. This time I decided to go to Tokyo.

As it happened we decided to go to Tokyo at the time the cherry trees blossom. Cherry blossoms or sakura are an important part of Japanese culture and Japanese people love to go for so called hanami, picnic under the cherry trees. We hadn’t really done any homework before taking off so we figured seeing the cherry blossoms would be a good option. A quick search gave us a list of places and close to the top were Ueno Park and Meguru River.

Ueno Park is a big park just around the corner from one of Tokyo’s big transit hubs, Ueno station. During sakura season, at least in the weekends, the place is absolutely full of people. Droves of people are strolling around, snapping pictures of the cherry trees, there are plenty of vendors, and pretty much every open space is occupied by groups of people with the blue tarps and picnic goodies. In some way it reminds me of the maid’s day off in Hongkong. The flowers are beautiful not the place is a bit too crowded for my taste. The good thing about Ueno park is that the nearby station is a stop on the airport express line, so if you have a long transfer at Narita airport you could feasibly make a quick trip into the city and check out the sakura. I do believe they light up the cherry trees at night but we didn’t see it so I can’t say for sure. 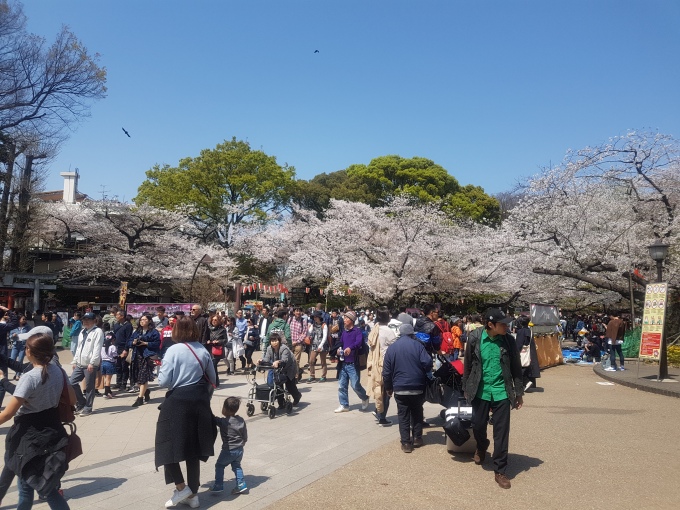 Meguru River is a small river in the south western part of Tokyo, just outside the city center. There are two subway stations close by, Naka-Meguru and Meguru and the distance between them along the river is about 3 kilometers. There are cherry trees all along the river so you could start at one station then stroll along the river to the other. However, I think the area around Naka-meguru is more beautiful and much more popular.

The first Sunday in April the Meguru district organize a sakura festival and we happened to time our visit just right. It’s not a huge festival by any means but there were a lot of vendors in the area near Naka-meguru station and a marching band playing music. We let us be inspired by everyone else and bought some champagne with strawberries to drink while we strolled around. It was very pleasant, not too many people, and the cherry trees were beautiful. A short distance down the river, most of the other visitors had dropped off but we continued. About a kilometer further ahead we came to some kind of open place where they had set up a food fair as part of the festival. It wasn’t super big but plenty of interesting food anyway. We really enjoyed it, especially the locally brewed beer.

In both Ueno Park and Meguru yini found art museums that she was interested in. The Ueno Royal Museum was supposed to have really good realistic paintings but both Yini and me felt a bit disappointed. That might be due to having too high expectations or the current exhibition. The Tokyo Metropolitan Teien Art Museum had a much more interesting exhibition in place and we really enjoyed it.

Tokyo us a great place to go shopping, there are lots of interesting things to buy in every category from clothes to home appliances, with fairly reasonable prices. Westerners mostly come for electronics while many Chinese and Taiwanese stock up on medicines and cosmetics. Since we didn’t have much else planned except looking at sakura, we spent much of the afternoons shopping. I will spare you the details but we had fun looking around, and I’m pretty sure Yini won’t need to buy any more cosmetics this year.

Overall I think it was a great trip, I got my passport renewed, Yini stocked up on things she needs, and we both really enjoyed seeing the sakura.

On the way home we took note of one thing that people might not know about: Taiwan has become really strict when it comes to preventing Africsn Swine Fever from entering the country, so they check very carefully if you have any meat products in your luggage. Simply put, if you want to avoid huge fines, don’t bring any meat, especially not pork, into Taiwan.

Finally I’d like to end the post with a few photos that don’t fit in under any other topic but are still worth showing.